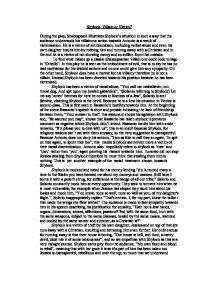 Shylock- Villain or Victim? During the play, Shakespeare illustrates Shylock's situation in such a way that the audience understands his villainous action towards Antonio is a result of victimisation. He is a victim of anti Semitism, including verbal abuse and even his own daughter insults him by robbing him and running away with a Christian and in the end he is a victim of not showing mercy and so suffers from that mistake. To find what makes up a classic Shakespearean villain one could look to Iago in "Othello". In this play he is seen as the embodiment of evil, that is to say he has no real motivation for his wicked actions and no one could give him any sympathy. On the other hand, Shylock does have a motive for his villainy therefore he is not a villain. Instead Shylock has been directed towards his position because he has been victimised. Shylock has been a victim of racial abuse, "You call me misbeliever, cut-throat dog, And spit upon my Jewish gabardine", "(Solanio referring to Shylock) ...read more.

Salerio and Solanio constantly mock him at every opportunity.They seek to torment him when he is most vulnerable; for example when Jessica has eloped they taunt him about his losses and mock him, "You knew, none so well, none so well as you, of my daughter's flight.", Solerio inappropriately replies "That's certain. I, for my part, knew the tailor / that made the wings she flew withal." The audiance is made to feel sympathy towards him in his speech describing his justification for equality, "Hath not a Jew hands, organs, dimensions, senses, affections, passions? Fed with the same food, hurt with the same weapons, subject to the same diseases, healed by the same means, warmed and cooled by the same winter and summer, as a Christian is?" Shylock is a victim of theft by his own daughter, Jessica and on top of that she runs away with a Christian, insulting and betraying him even further. Her only excuse for running away is that their house is boring, "Our house is hell, and thou, a merry devil, didst rob it of some tediousness", and so we empathise with Shylock as this is a very meagre excuse. ...read more.

Here Shakespeare shows how much victimisation can lead to inhumane actions making him a villain. Towards the end of the play, Shylock seems to be the villain because he seeks to murder Antonio; but he is not a villain because the audience know what has leaded him to his wrong actions. Because he has been driven to the edge of insanity, from the torment and prejudice pushed on him throughout his life by his own Venetian community this justifies his want for revenge. It has led him to become sadistic and blood thirsty and he forgets mercy only because he was treated in the same way. In the end Shylock's punishment is overly harsh with Antonio forcing him to convert to Christianity. Shylock's life is spared but he may be better off dead because he has nothing to live on, all his wealth has been distributed among his enemies. This makes the audiance sympathise with him because of the unfair and harsh punishment he receives. He is a victim of the Christians' intolerance of other races and ideas. ...read more.

Though the candidates starts this essay well, their introduction is missing; an outline of what the candidate plans to discuss, a statement of any questions that the candidate intends to answer (in this case, is Shylock a villain or victim?) ...

Though the candidates starts this essay well, their introduction is missing; an outline of what the candidate plans to discuss, a statement of any questions that the candidate intends to answer (in this case, is Shylock a villain or victim?) and a vernal introduction to Shylock as a charter. If you're struggling with your introduction is a good idea to go back and re-write one you've finished your essay. This is your chance to catch the readers attention, you should try and make it short and to the point but interesting (which can be done by mentioning additional facts from independent research). In general the candidates response to the question is thorough and they have discussed their ideas in a clear and organised manor.

The level of analysis shown by this candidate is of a high standard, they give their own ideas and opinions on Shylock as a character and pick out key quotations from the play to back up these ideas, rather than simply retelling the story. They have shown a good understanding of how this type of essay should be written. In addition they have undergone independent research as they mentioned the way in which Jewish people where generally treated at the time this play was written. This shows the candidates interest in their work and makes the essay more enjoyable to read. Though the candidate gives a conclusion they have mostly continued their analysis. A strong conclusion should answer the initial question, summarise your key points and ideas and include your personal opinions. This is important as it brings the essay to a close and gives you a chance to leave the reader with a good impression.

To achieve a higher grade the candidate needed to have mentioned the use of language within the play, It is necessary to discuss various linguistic techniques, such as the use of metaphors, smilies and alliteration etc. However on a more positive note, the candidate does uses an extensive range of vocabulary and there a few if any problems with spelling or grammar.