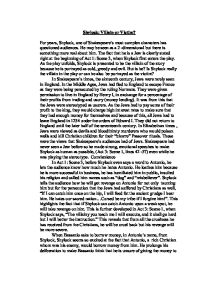 Shylock: Villain or Victim? For years, Shylock, one of Shakespeare's most complex characters has questioned audiences. He may be seen as a 2-dimensional but there is something more real about him. The fact that he is a Jew is clearly stated right at the beginning of Act 1: Scene 3, when Shylock first enters the play. As the play unfolds, Shylock is presented to be the villain of the story because he is portrayed as cold, greedy and evil. But is he? Is Shylock really the villain in the play or can he also be portrayed as the victim? In Shakespeare's times, the sixteenth century, Jews were rarely seen in England. In the Middle Ages, Jews had fled to England to escape France as they were being persecuted by the ruling Normans. They were given permission to live in England by Henry I, in exchange for a percentage of their profits from trading and usury (money lending). It was from this that the Jews were stereotyped as usurers. As the Jews had to pay some of their profit to the king, they would charge high interest rates to make sure that they had enough money for themselves and because of this, all Jews had to leave England in 1254 under the orders of Edward I. ...read more.

Shylock seems intensifingly greedy Act 1, shows Shylock as a cruel, greedy, old man but there is an aspect of it in which his character is made more human. He is extremely faithful to his religion. "I will buy with you, sell with you, talk with you, walk with you, and so following; but I will not eat with you, nor pray with you." According to the Jewish religion, Jews must eat specially prepared, kosher food and must say Jewish prayers which is why Shylock refuses to eat and pray with the Christians. Although he does dine with them later in the play, he says he goes in hate. The audience is made to feel sympathy for Shylock when his most trusted possession fails him. He placed his absolute confidence in his daughter, Jessica, as well as his house and wealth, Act 2: Scene 5, lines 9-19 and 27-39 demonstrate how much Shylock trusts his daughter. In Act 3: Scene 1, lines 66-76, Shylock says how he would rather see Jessica in her coffin, with all the stolen belongings, than have her back. This conveys Shylock as a cold, greedy, unloving father. ...read more.

This is particularly unfair because Shylock is a Venetian, not a foreigner, it's just because he is a Jew. Our pity towards Shylock is heightened when he is totally stripped of his dignity. Half of the money he owns, he can keep, but the other half must be given to Lorenzo and Jessica. He is also forced to change his religion to Christianity, the religion that he has hated for so many years. Shylock agrees. Shylock leaves without friends, family and the very thing that got him in to this mess, his faith. He leaves as nothing. So in conclusion to the question "Shylock: villain or victim?", I say that Shylock is the victim of the play, although he does act in villainy sometimes. Although Shylock had every intention of taking the flesh, he didn't actually do it. By the end of the play, Shylock had only said his feelings of hate toward Antonio- he hadn't abused Antonio physically or verbally as Antonio did to him, so Shylock was really innocent compared to Antonio. Shylock is an alien in a society, which has a minority of Jews. The characters are obviously living in a society full of racism and hatred between the Christians and the Jews and this is what causes Shylock to act in the way he does. Can he really be blamed? ...read more.