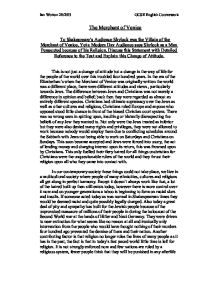 Shylock was the Villain of the Merchant of Venice, Yet a Modern Day Audience sees Shylock as a Man Persecuted because of his Religion, Discuss this Statement with Detailed Reference to the Text and Explain this Change of Attitude.

The Merchant of Venice To Shakespeare's Audience Shylock was the Villain of the Merchant of Venice, Yet a Modern Day Audience sees Shylock as a Man Persecuted because of his Religion, Discuss this Statement with Detailed Reference to the Text and Explain this Change of Attitude. This is not just a change of attitude but a change in the way of life for the people of the world over this troubled four hundred years. In the era of the Elizabethan's when the Merchant of Venice was originally written the world was a different place, there were different attitudes and views , particularly towards Jews. The difference between Jews and Christians was not merely a difference in opinion and belief; back then they were regarded as almost an entirely different species. Christians had ultimate supremacy over the Jews as well as other cultures and religions, Christians ruled Europe and anyone who opposed stood little chance in front of the biased Christian court system. There was no wrong seen in spitting upon, insulting or blatantly disrespecting the beliefs of any Jew they wanted to. Not only were the Jews treated as inferior but they were also denied many rights and privileges, they were not allowed to work because nobody would employ them due to conflicting schedules around the Sabbath with Jews not being able to work on Saturdays and Christians on Sundays. ...read more.

When confronted about this by Shylock who asks why he should lend Antonio the money when he has done such things to him Antonio calmly replies. 'I am as like to call thee so again, to spit on thee and to spurn thee too' he has even paid Shylock the ultimate insults by calling him a devil and damning him to hell. This statement shows the exact feelings that Christians felt for Jews in the time of Shakespeare, that they have done such things to Jews before and they will do them again because they can, because they are better and because they are Christian. This gives them the right to do what they want whenever they want to anyone who was not a Christian too. After Jessica has ran away with Lorenzo, Shylock goes to meet with Tubal however before Tubal arrives he speaks with Solanio and Salerio, who are two friends of Antonio and Bassanio. During the course of their conversation Solanio and Salerio frequently taunt and tease Shylock about the departure of his daughter Jessica and they also call him the 'devil' before he arrives. They didn't deny and took no shame in the fact that they helped in his 'daughter's flight' they imply that Shylock deserved the betrayal because he is a Jew. ...read more.

Antonio was saved by what could be construed as divine intervention and when his attempted murderer's fate was placed in his hands he showed mercy. Then paid him the highest honour of becoming a Christian and a chance at what was at the time considered a real life, albeit not knowing the pain he was causing Shylock in the process. Yes Shylock wanted revenge, but for who? If every other Jew could get by under these circumstances then why couldn't he? The only real reason Shylock wanted revenge was because of his daughter leaving him and he was enforcing his petty vengeance on the first person he got the opportunity to, and it was not true revenge either but a chance he saw in his bitter eyes and seized. Although Antonio was far from perfection, he was a better man than the devilish Shylock. Not because he was a Christian but because he showed 'the quality of mercy' to a man who had tried to end his life whereas Shylock could not show it to a man who merely threw the odd insult at him which was considered ordinary anyway. Poetic justice was served on Shylock for his malice in an ironically cruel twist of fate. Ian Wotton 28/2/03 GCSE English Coursework ...read more.