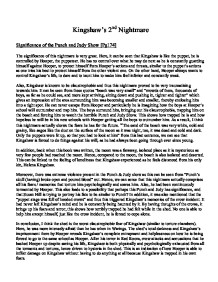 Significance of the Punch and Judy Show

Kingshaw's 2nd Nightmare Significance of the Punch and Judy Show [Pg174] The significance of this nightmare is very great. Here, it can be seen that Kingshaw is like the puppet, he is controlled by Hooper, the puppeteer. He has no control over what he may do next as he is constantly guarding himself against Hooper, to protect himself from Hooper's actions and threats, similar to the puppet's actions as one tries his best to protect himself from the other violent one. On the other hand, Hooper always wants to control Kingshaw's life, to dare and to taunt him to make him feel inferior and constantly weak. Also, Kingshaw is known to be claustrophobic and thus this nightmare proved to be very traumatizing towards him. ...read more.

"The sand of the beach was very white, cold and grainy, like sagos like the dust on the surface of the moon as it was night, too, it was dead and cold and dark. Only the puppets were lit up, so that you had to look at him" from this last sentence, we can see that Kingshaw is forced to do things against his will, as he had always been going through ever since young. In addition, back when this book was written, the moon was a faraway, isolated place as it is mysterious as very few people had reached the moon. Hence, compared to the moon, the beach is also isolated and deserted. This can be linked to the feeling of loneliness that Kingshaw experienced as he feels distanced from his only kin, Helena Kingshaw. ...read more.

No one is able to help him except himself, just like the crow incident, he is forced to cope alone. In conclusion, I think the shed is the worst claustrophobic fear of Kingshaw (similar to torture chambers). Here, he was more intensely afraid than he has when in Warings. The shed's total darkness and Kingshaw's imprisonment there by Hooper reveals Kingshaw's complete entrapment and helplessness on how he is being forced to go to the same school as Hooper. After his terror in Red Room, crow attacks and accusations that he bashed Hooper up despite saving his life, Kingshaw is both physically and psychologically exhausted from all the torments and tortures, hence driven to hysteria in the shed. This is an indication of how Hooper is able to inflict damage on Kingshaw without having to do anything at all because Kingshaw is trapped in his own fears. ...read more.