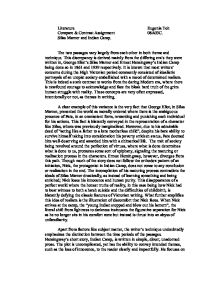 Literature Eugenia Toh Compare & Contrast Assignment 08A03C. Silas Marner and Indian Camp. The two passages vary largely from each other in both theme and technique. This discrepancy is derived mainly from the differing era's they were written in, George Eliot's Silas Marner and Ernest Hemingway's Indian Camp being done so in 1861 and 1939 respectively. It is known that most writers' concerns during the High Victorian period commonly consisted of idealistic portrayals of an utopist society embellished with a mood of determined realism. This is indeed a stark contrast to works from the daring Modern era, where there is newfound courage to acknowledge and face the bleak hard truth of the grim human struggle with reality. These concepts are very often expressed, intentionally or not, as themes in writing. A clear example of this variance is the very fact that George Eliot, in Silas Marner, presented the world as morally ordered where there is the ambiguous presence of Fate, in an omniscient form, rewarding and punishing each individual for his actions. ...read more.

The plot is uncomplicated, yet has the ability to convey intended themes, such as the loss of innocence, to the reader clearly and impactfully. He focuses on allowing the characters to grow and speak by themselves, instead of consistently narrating. This is exemplified by the frequent use of dialogue. Each spoken line is tastefully phrased to accustom the reader to the behaviors and traits the characters possess. For example, through the middle bit of the story when the Caesarian procedure was being carried out, there is a short exchange between Nick and his father, where Dr. Adams questions Nick on whether he "like[s] being an interne", Nick replies that it is "All right'. By merely looking at this, we can infer that despite the fact that Nick is obviously affected by the blood and gore of the operation, he is seemingly calm and tries to share the reign of accomplishment his father is feeling just to please him. This proves that he is slowly being exposed to reality's difficulties, thus losing his innocence. ...read more.

Similarly, in Indian Camp, it is apparent that the Whites regard themselves with superiority over the Indians. Right from the beginning of the passage, we see Nick and his father being waited upon by these Indians. This acquaints the reader with the immediate impression that the Indians are of a lower rank than the Whites. Throughout the passage, many examples are cited justifying this claim. For instance, when Nick observed that the "Indian who was rowing them was working very hard", when the young Indian was delegated the task of carrying a lantern to lead them into the woods and lastly the utter disregard for the Indian lady howling in pain as Dr. Adam did not even attempt to reduce her sufferings, instead, dismissing her cries with the excuse of "not having any anesthetics". The two passages are seemingly worlds apart in technique and subject matter. Hemingway's realistic writing being burnished, simple and vigorous as compared to Eliot who embellishes her politically astute, socially conscious work with maudlin sentimentalities. Still, universal themes such as the presence of a Class System are able to encapsulate both passages under one category, aligning them in a way where they are mildly alike. ...read more.