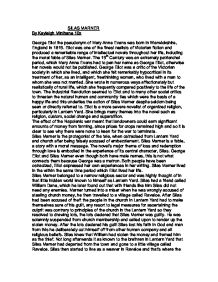 SILAS MARNER By Kayleigh Minihane 10x George Eliot the pseudonym of Mary Anne Evans was born in Warwickshire, England in 1819. Eliot was one of the finest realists of Victorian fiction and produced a remarkable range of intellectual novels throughout her life, including the moral fable of Silas Marner. The 19th Century was an extremely patriarchal period, which Mary Anne Evans had to pen her name as George Eliot, otherwise her novels would not be published. George Eliot was a critic of the Victorian society in which she lived, and which she felt remarkably hypocritical in its treatment of her, as an intelligent, freethinking woman, who lived with a man to whom she was not married. She wrote in numerous ways affectionately but realistically of rural life, which she frequently compared positively to the life of the town. The Industrial Revolution seemed to Eliot and to many other social critics to threaten the natural human and community ties which were the basis of a happy life and this underlies the action of Silas Marner despite seldom being seen or directly referred to. Eliot is a more severe novelist of organized religion, particularly in Lantern Yard. She brings many themes into the novel such as religion, custom, social change and superstition. ...read more.

When he was paid in gold for his first piece of weaving in Raveloe he enjoyed the field and the look of it and comforted himself with his new love. Silas started loving gold so much that after that day he hypothesized it to be his friend and everyday he counted his beloved money. Chapter five gives some background on Silas' decision to leave his home unattended and unlocked. He was simply doing a routine errand, briefly leaving the cabin. He didn't lock the door because after fifteen years of this pattern of living, any alteration, such as a robbery, seemed almost incomprehensible to the weaver hermit. Upon Silas' return, he checks under the bricks where his gold is kept and to his shock and horror sees that it has been stolen. Silas immediately descends into a mode of panic, thinking that the "cruel power" of God has made him "a second time desolate." He rushes into town, determined to see the constable and put an end to this sudden misery. When his gold was stolen he totally believed that it was no ordinary theft but thought that some mysterious power had taken everything away from him. ...read more.

The traditional time of year for weddings in Raveloe was Laburnum and Lilac time. Eppie�s wedding was in this season. She had often thought, though with certainty that she could never have a perfect wedding dress but Nancy provided for her. On the wedding day Godfrey was not in Raveloe for 'special reasons.� The village had accepted his kindness to Silas and Eppie an attempt to make up for the wrong his brother had done to the weaver in stealing his gold. Mr Macey explained how right he always had been about Silas, and the return of his money. The villagers while waiting for the feast consider the blessings that Silas had brought on himself by taking Eppie in. His patience had been rewarded, his gold restored, his daughter preferring him to her blood father and now Silas had son to help care for him in his retirement. The once outcast weaver was now a respected and well-loved family man: The garden was fenced with stones on two sides, but in front there was an open fence, through which the flowers shone with answering gladness, as the four united people came within sight of them. ' O father', said Eppie, 'what a pretty home ours is! I think nobody could be happier than we are�. (p.237) ...read more.