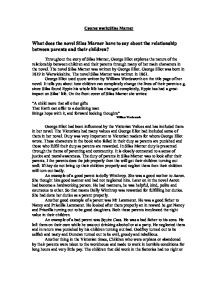 Course work:Silas Marner What does the novel Silas Marner have to say about the relationship between parents and their children? Throughout the story of Silas Marner, George Eliot explores the nature of the relationship between children and their parents through many of her main characters in the novel. The novel Silas Marner was written by George Eliot. George Eliot was born in 1819 in Warwickshire. The novel Silas Marner was written in 1861. George Eliot used quote written by William Wordsworth on the title page of her novel. It tells you about how children can completely change the lives of their parents e.g. since Silas found Eppie his whole life has changed completely, Eppie has had a great impact on Silas' life. On the front cover of Silas Marner she writes: "A child more that all other gifts That Earth can offer to a declining man Brings hope with it, and forward looking thoughts" William Wordsworth George Eliot had been influenced by the Victorian Values and has included them in her novel. The Victorians had many values and George Eliot had included some of them in her novel. ...read more.

So Godfrey tells Nancy (Godfrey's wife) about Dunstan and then tells her that Eppie is really his child and Molly was his wife. They both agree to adopt Eppie. In this part, when Godfrey tries to claim Eppie, Silas gets very angry. Eppie in the end rejects Godfreys offer and then Godfrey and Nancy leave. After this Silas and Eppie go back o Lantern Yard to see Silas' old friend, but when they get there it has completely changed. In the end Eppie and Aaron Winthrop get married and Godfrey doesn't show up. Silas Marner is a lonely weaver who lives in Raveloe. He used to live in Lantern Yard but moved because he felt the need to move after being falsely accused of stealing. After this incident he felt betrayed and lost all trust in others Silas lived by himself in Raveloe. He worked as a weaver and gained money from his work, his gold was one purpose in life. One night when Silas was out, he left the front door of his cottage open. On that night Dunstan Cass went into silas' house and stole his money, fled off into the night and was never seen again. Silas was devastated when he discovered his gold was missing. ...read more.

My moneys gone I don't know where and this has come from I don't know where. I know nothing - I'm partly mazed." These are silas' reasons for taking in Eppie. Silas doesn't want anybody to take Eppie away from him, he wants her all to himself. He rejected the offer of people at the Red house to take Eppie in. Dolly Winthrop helped silas out a lot. She helps him by telling him how to look after Eppie, but silas doesn't want that much help. He says that she can help him but he says "I want to do things for it myself, else it may get fond o' someone else, and not fond o' me. I've been used to fending for myself in the house. I can learn, I can learn." This shows how desperate he was for Eppie to love him. He didn't want Eppie to get too fond of anybody else. Silas wants to look after her so she will recognise him only as a father and no one else. He is very protected over her, especially when dolly says "I can teach em this little un, Master Marner, when she gets old enough." However silas replies by saying "but she'll be my little un, she'll be nobody else's." this shows how selfish he is and shows how protective he is of her. ...read more.