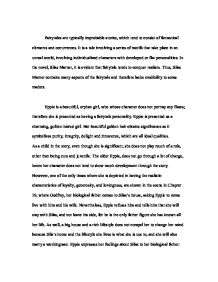 Fairytales are typically improbable stories, which tend to consist of fantastical elements and occurrences. It is a tale involving a series of motifs that take place in an unreal world, involving individualized characters with developed or flat personalities. In the novel, Silas Marner, it is evident that fairytale tends to conquer realism. Thus, Silas Marner contains many aspects of the fairytale and therefore lacks credibility to some readers. Eppie is a beautiful, orphan girl, who whose character does not portray any flaws; therefore she is presented as having a fairytale personality. Eppie is presented as a charming, golden-haired girl. Her beautiful golden hair obtains significance as it symbolizes purity, integrity, delight and innocence, which are all ideal qualities. As a child in the story, even though she is significant, she does not play much of a role, other than being cute and juvenile. The older Eppie, does not go through a lot of change, hence her character does not tend to show much development through the story. ...read more.

Regarding this, her character is very flat, and also contains no flaws. As a result, some readers might find there to be a lack of credibility in the novel due to Eppie's immense amount of perfection, which does not leave much room for her realistic traits. A fairytale plot is evident in Silas Marner as it revolves around good prevailing evil, coincidental and fated events, and is also an aspect which lacks credibility. In the novel, the plot follows when Silas, the protagonist, who is a linen-weaver from Lantern Yard, is framed by his best friend of a theft which he did not commit, as a result, he gets expelled from his church, and to make matters worse, his best friend marries his ex-fianc�. In loss of hope, he then flees to Raveloe, where he is portrayed as an old, grumpy, quiet outsider, who takes pleasure in counting his gold, and enjoys his own company rather than mingling with others. ...read more.

Also, Silas is pleased to receive the money that Dunstan had stolen. Ultimately, on a beautiful, warm, flawless day, Eppie and Aaron have a fairytale wedding, and Eppie tells Silas that she and her new husband will always be with him. Thus, being a vital fairytale characteristic, it is one of the reasons which may cause the book to lack credibility to some practical readers. Those who enjoy twisted endings, unexpected outcomes, or a more rational conclusion, may be very critical towards the ending of Silas Marner. It is clear that the story, Silas Marner contains many aspects of the fairytale and therefore lacks credibility to some readers. Realistic characteristics in Eppie are minimized due to her vastly apparent perfection and simplicity of a character, where she can sometimes be depicted as a princess in disguise. The story structure of fortuitous coincidence, the relationship between good and evil, and the happy ending makes the story very fable-like. Even though the story consists of realism, the fairytale aspects are prominent, and readers who prefer an abundant down-to-earth book, may not find Silas Marner to be of that sort. ...read more.