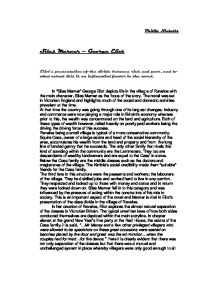 Silas Marner - George Eliot. Eliot's presentation of the divide between rich and poor, and to what extent this is an influential factor in the novel.

Phillip Nicholls Silas Marner - George Eliot Eliot's presentation of the divide between rich and poor, and to what extent this is an influential factor in the novel. In "Silas Marner" George Eliot depicts life in the village of Raveloe with the main character, Silas Marner as the focus of the story. The novel was set in Victorian England and highlights much of the social and domestic activities prevalent at the time. At that time the country was going through one of its largest changes. Industry and commerce were now playing a major role in Britain's economy whereas prior to this, the wealth was concentrated on the land and agriculture. Both of these types of wealth however, relied heavily on poorly paid workers being the driving the driving force of this success. Raveloe being a small village is typical of a more conservative community. Squire Cass, owner of a large estate and head of the social hierarchy of the area, accumulates his wealth from the land and property and from the long line of landed gentry that he succeeds. The only other family that rivals this kind of standing within the community are the Lammeters. ...read more.

He desired money and spent most of his time treasuring it and counting it. He seldom left his house and did not integrate into the social activities of the village even with the "beer drinkers" in the "Rainbow" pub. This anti-social attitude is contrasted by moments of spontaneous confidence when he burst in unannounced into the centre of Raveloe life. Firstly when his money is stolen, Marner's unanticipated entrance into the pub sparked off curiosity about him and increased speculation that there was something definitely not right about him. In chapter seven it says "...Silas Marner...uttering no word but looking ...with his strange unearthly eyes" it goes on to then say "the landlord...was bound to keep his house open to all company". The use of Marner's description in this paragraph emphasises how people in the community viewed Silas; as an outcast. It also shows how even the landlord described in chapter six as being "neutral" between the classes had to force himself to accept Silas into his establishment. Marner's intrusion into the community like this shocked all involved. This is also true when Silas again makes an unanticipated arrival at the Red House party. ...read more.

Here Godfrey Cass simply demands to have Eppie as if it is his right. This patronising and insensitive way of approaching Silas defines the relationship between the rich and poor, which in this novel is so carefully shown through the relationship between Godfrey Cass and Silas Marner. It is ironic then that in the closing chapters of the novel Silas is, after his integration into the community through his church going and his decision to raise Eppie, seen in a much more sympathetic light within the community of Raveloe. He now becomes one of the ordinary people of the village, even though he is still much distance between him and the Cass'. Through the changing image of Silas in the community and the status naturally given to Godfrey, Eliot manages to depict the very real line between the wealthy and the poor in the nineteenth century through the two main characters accompanied by a host of events that separate the rest of the village. The divide between the classes, influences the way in which people were treated at the time and this ultimately results in the events of Silas' life being different due to the class to which he is consigned. ...read more.