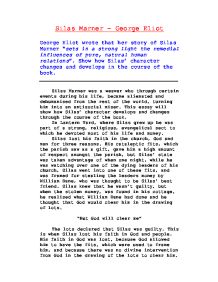 Silas Marner - George Eliot wrote that her story of Silas Marner &quot;sets in a strong light the remedial influences of pure, natural human relations&quot;. Show how Silas' character changes and develops in the course of the book.

Silas Marner - George Eliot George Eliot wrote that her story of Silas Marner "sets in a strong light the remedial influences of pure, natural human relations". Show how Silas' character changes and develops in the course of the book. Silas Marner was a weaver who through certain events during his life, became alienated and dehumanised from the rest of the world, turning him into an antisocial miser. This essay will show how Silas' character develops and changes through the course of the book. In Lantern Yard, where Silas grew up he was part of a strong, religious, evangelical sect to which he devoted most of his life and money. Silas lost his faith in the church, God and man for three reasons. His cataleptic fits, which the parish saw as a gift, gave him a high amount of respect amongst the parish, but Silas' state was taken advantage of when one night, while he was watching over one of the dying leaders of his church, Silas went into one of these fits, and was framed for stealing the leaders money by William Dane, who was thought to be Silas' best friend. Silas knew that he wasn't guilty, but when the stolen money, was found in his cottage, he realised what William Dane had done and he thought that God would clear him in the drawing of lots. ...read more.

"But now, when all purpose was gone, that habit of looking towards the money and grasping it with a sense of fulfilled effort made a loam that was deep enough for the seeds of desire..." The money was his only goal and he became a miser and completed his alienation, dehumanisation and loss in faith of men and God! "He handled them, he counted them, till their form and colour were like the satisfaction of a thirst to him;" "...he loved them all...as if they had been unborn children." "His life had reduced itself to the mere functions of weaving and hoarding, without any contemplation of an end towards which the functions tended." When Silas' gold was stolen, it was a blessing in disguise but at first Silas was once again devastated, just as at Lantern Yard thinking that the "cruel power" of God has made him "a second time desolate". His reaction at first was the same as at Lantern Yard, he loses faith completely. "Again he put his trembling hands to his head, and gave a wild ringing scream, the cry of desolation...He turned and tottered towards his loom, and got into the seat where he worked, instinctively seeking this as the strongest assurance of reality". Silas was forced to seek help and goes to the Rainbow Inn, forcing him to communicate with others in order to get his gold returned and to socially rehabilitate. ...read more.

He was also coming to terms with his past when he named Eppie after his little sister. Eliot shows that Silas is almost back to his similar state at lantern Yard, "Silas began to look for the once familiar herbs again" "As the child's mind was growing into knowledge, his mind was growing into memory: as her life unfolded, his soul, long stupefied in a cold narrow prison, was unfolding too, and the trembling gradually into full consciousness." Silas becomes willing to come to terms with his past and shares it with Dolly. Eliot narrates, "...with reawakening sensibilities, memory also reawakened, he had begun to ponder over the elements of his old faith, and blend them with his new impressions, till he recovered a consciousness of unity between his past and present. The sense of presiding goodness and the human trust which had been some error, some mistake, which had thrown the dark shadow over the days of his best years." Silas' faith in God had been restored and he believed that what had happened was all part of God's plan. Finally, when Silas finds out that Godfrey is Eppie's father and that he intends on adopting her, Silas' faith is tested, both in man and God. He responds and shows that he now has faith in god, "God gave her to me" He gives Eppie the choice and believes she will make the right choice. She chooses Silas and says, "I can't feel as I've got any father but one" Silas' faith has been completely restored in both God and men. ...read more.