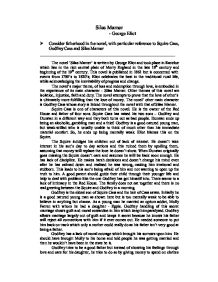 Godfrey has a lack of moral courage which brought his sorrows upon him. He should have brought Molly to his home and told people he was getting married and then he wouldn't have been in the state he is. Godfrey tries to be a good father but instead of showing his feelings through love and care for his daughter, he tries to do so by giving money to spend on clothes and accommodation for Eppie and when she is older making her a lady and rich. When Eppie is young and living with Molly, Godfrey rarely visited on odd occasion and took no notice of his daughter. He doesn't show any feelings towards her, he just sees her because it is father's duty to give money towards her upbringing, not through love and his own willingness to do so. Godfrey is selfish as well. This is proved when he doesn't do more for Eppie and worries about his self image and what people would think if they found out he had married a drug addict and also doesn't want anything to get in the way of him courting Nancy. As his own father, Godfrey has proved to be a bad father. ...read more.

The novel 'Silas Marner' gives us Eliot's message about fatherhood which is the real father is the one who cares for child, loves and treats the child well. The ideal father lets his child make decisions on its own to lead its life. The father who has blood relation with child and who is child's biological father but doesn't care for child does not deserve to be called 'Father'. The Squire is biological father of Dunstan and Godfrey but spoilt he them which made them expect people to do everything for them in life and also greedy. Also, Godfrey is Eppie's biological father and means to be a good father but he is mentally weak and doesn't show his love thorough emotions but by money which isn't a good sign of good parenting. This concludes that neither Squire nor Godfrey is able to become good father. Eliot's ideal fathering role is Silas Marner. This is because he is not biological father of Eppie but loves Eppie and treats her well, letting her make decisions on her own to lead her own life. This can be seen in the words of Eppie, "I can't feel as I've got any father but one, I've always thought of a little home where he'd sit i' the corner, and I should fend and do everything for him. I can't think o' no other home" ...read more.