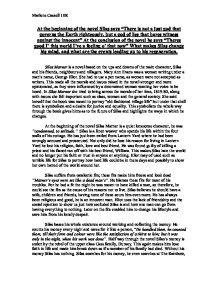 Silas Marner is a novel based on the ups and downs of the main character, Silas and his friends, neighbours and villagers.

At the beginning of the novel Silas says "There is not a just god that governs the Earth righteously, but a god of lies that bares witness against the innocent" At the conclusion of the novel he says "Theres good I' this world I've a feeling o' that now" What makes Silas change his mind, and what are the events leading up to his regeneration. Silas Marner is a novel based on the ups and downs of the main character, Silas and his friends, neighbours and villagers. Mary Ann Evans was a woman writing under a man's name, George Eliot. She had to use a pen name, as women were not accepted as writers. This made all the morals and issues raised in the novel stronger and more opinionated, as they were influenced by a determined woman wanting her voice to be heard. In Silas Marner she tried to bring across the morals of her time, 1819-80, along with issues she felt important such as class, women and the general society. She said herself that the book was meant to portray "old-fashioned village life" but under that shell there is symbolism and a desire for justice and equality. This symbolism the whole way through the book gives hints as to the future of Silas and highlights the ways in which he changes. At the beginning of the novel Silas Marner is a quiet lonesome character, he was "condemned, to solitude." ...read more.

The weather also reflects the death of Molly Godfrey's wife. It is snowing and Eliot uses Pathetic Fallacy to predict the future. The bad stormy weather shows that something bad is going to happen, for example, a death. Snow also shows purity and innocence, this shows the innocence of Molly's child, the next character to enter the novel. Eliot could have used a character like Molly to show the way women were treated in her opinion, the fact that Molly was used and then left could reflect what Eliot thought about how women were used and treated in society. The way that molly looked terrible but all the elements of her life added up to happiness a child, a husband and an income Eliot could of used this to show that all the women dressed up in riches and gold do not have these elements of happiness and possibly don't live there own lives. The lack of responsibility and the way they were looked down upon just for being a woman. Godfrey only married Molly because he got her pregnant Eliot could have used this to show how much women were just items and that love did not come into it. The innocence of Eppie reflects on the innocence of Silas when he was in Lantern Yard. Eliot makes the child a symbol of innocence, therefore a symbol of acceptance. ...read more.

Yet again the idea of fate is apparent with Nancy wanting Eppie for personal gain rather than love and Silas for love so Silas gets Eppie in the end. Nearing the end of the story, Silas decides to go back to Lantern Yard with Eppie. When he arrives, he finds a factory has replaced the village. Eliot uses a factory in the place of Lantern Yard to show how the world has moved on, Silas's life as well as industry and technology. She also has Lantern Yard gone as it proves finally to Silas that there is no going back and that the past really is behind him. The church he used to belong to no longer exists and the people he once loved and lost have been buried. Silas is free from the torment of his past life and now truly able to be happy. Silas Marner is a tale of overcoming obstacles in life, its main genre by the end is hope but at the beginning this theme is not apparent. Silas is a character everyone is able to relate with; he has troubles and problems but still manages to over come everything to be a better person. It also carries the moral that "what goes around comes around" which is portrayed by Eliot in many ways using symbolism, setting and personal experiences. The last line of the novel is "I think nobody could be happier than we are." I think that this sentence is a wonderful conclusion and expresses just how much Silas has changed since the beginning. Marlene Cassell 10R ...read more.