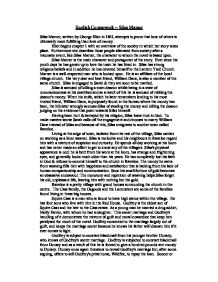 Silas Marner, written by George Eliot in 1861, attempts to prove that love of others is ultimately more fulfilling than love of money.

English Coursework ~ Silas Marner Silas Marner, written by George Eliot in 1861, attempts to prove that love of others is ultimately more fulfilling than love of money. Eliot begins chapter 1 with an overview of the society in which her story takes place. Furthermore she describes those people alienated from society after a traumatic event, like Silas Marner, the character to whom the novel is based upon. Silas Marner is the main character and protagonist of the story. Ever since his youth days he has grown up to love the town he has lived in. Silas has strong religious beliefs and in addition he has devoted himself to the Lantern Yard Church. Marner is a well-respected man who is looked upon. He is an affiliate of the local village church. His very dear and best friend, William Dane, is also a member of the same church. Silas is engaged to Sarah & they are soon to be married. Silas is accused of killing a town deacon whilst being in a state of unconsciousness at his deathbed and as a result of this he is accused of robbing the deacon's money. ...read more.

Dunsey is left with no solution other than to walk home. On his way home, Dunsey passes Silas Marner's cottage and he remembers that Silas has a hoard of gold hidden inside. Seeing that nobody is inside and that the door is unlocked he decides to go in and to his luck he finds the gold hidden under the brick floor. Dunsey being a selfish, greedy man takes this opportunity and away he goes with the money. Silas's happiness is doomed when his money is stolen and goes to inform the village people right away. The village people are very sympathetic towards him. Christmas had arrived and the people in the village were offering Silas presents of food as a token of their kindness and friendship. On New Year's Eve there is a grand party at the Red House. Godfrey Cass had been looking very forward to this party because it meant that he would be in the presence of Nancy Lammeter, a woman who he secretly loves. Godfrey wanted to marry Nancy but there was one thing stopping him, he was married to Molly and was also a father. Nancy would not marry Godfrey until he could prove that he was the man Nancy wanted him to be. ...read more.

For example; the war in Iraq has left thousands of people homeless and many young Iraqi children are now orphans as a result of this horrendous action. Ali Abbas, a thirteen-year-old Iraqi boy lost both arms and suffered 60% burns in a US missile attack on Baghdad early in the Gulf War. His parents and 13 other family members were killed. He was airlifted from Iraq to a hospital in Kuwait for treatment amid fears an infection could prove fatal and then later brought to Britain. He has been fitted with two artificial arms at Queen Mary's Hospital in Roehampton, southwest London. He has been fitted with a cosmetic prosthetic on his left side and a state-of-the art artificial limb on the right with an electrode touching the muscle on his stump to open and close his hand (stated in the newspaper). However, he still faces months of occupational therapy and while he is growing, the limbs will need to be replaced at intervals. The boy's suffering has touched the hearts of millions worldwide and sparked a high-profile campaign to save his life. This happened for something which he wasn't even responsible for which goes to show that people must think about their actions and not do something wrong to get what they want. ...read more.