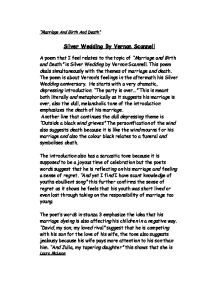 "Marriage And Birth And Death" Silver Wedding By Vernon Scannell A poem that I feel relates to the topic of "Marriage and Birth and Death" is Silver Wedding by Vernon Scannell. This poem deals simultaneously with the themes of marriage and death. The poem is about Vernon's feelings in the aftermath his Silver Wedding anniversary. He starts with a very dramatic, depressing introduction. "The party is over..." This is meant both literally and metaphorically as it suggests his marriage is over, also the dull, melancholic tone of the introduction emphasizes the death of his marriage. Another line that continues the dull depressing theme is "Outside a black wind grieves" The personification of the wind also suggests death because it is like the wind mourns for his marriage and also the colour black relates to a funeral and symbolises death. The introduction also has a sarcastic tone because it is supposed to be a joyous time of celebration but the poets words suggest that he is reflecting on his marriage and feeling a sense of regret. ...read more.

Another tone adopted by the poet is a cold tone against his wife. "And Helen, my partner of all these year," He uses the word partner to show that she is no longer considered a lover. "My sack of sighs" suggests she is a burden to him, and the alliteration and onomatopoeia used in this sentence emphasizes the fact that she complains all the time but yet she still hurts, I think she loves him still but hurts because their love is fading away. "With injured, bovine eyes." Another piece of evidence that he no longer considers her a lover is "there must have been passion once" this shows that there is no real physical contact anymore, maybe because of an indifference or because they are antagonistic towards one another. "But neither she nor I could bear to have its ghost come prowling from its dark and frowsy lair." I think this is an important sentence in the theme of death and marriage because it shows that none of them could stand any physical contact, and he compares their love to a ghost, something rotten, decomposing, dead, buried and gone. ...read more.

In the final stanza the writer's language confirms that he has never been happy in his marriage. "Twenty five yeas we've now survived" the word survived shows that it has been a struggle, it has been something that he hasn't enjoyed. "I'm not sure either why or how" here the writer seems surprised, he doesn't quite understand why his marriage lasted so long because he feels it was dead long before their silver wedding anniversary. Finally the last two lines the writer used a ply on words with "A wreath of quarrels set" he uses the irony here to show a play on the laurel wreath given to victors. In a way he is questioning himself here. Is there a victor? Will anybody win? The final line also shows hat the poet is getting older and more stressed, the relationship has taken its toll on him physically, mentally and emotionally. "On my tired and balding brow" I think that this poem of reflection is the writer questioning himself on why he is keeping something going that clearly died a long time ago. ...read more.