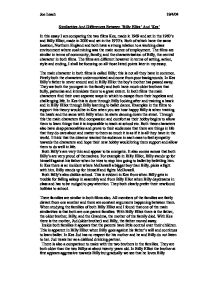 Similarities And Differences Between 'Billy Elliot' And 'Kes'

Similarities And Differences Between 'Billy Elliot' And 'Kes' In this essay I am comparing the two films Kes, made in 1969 and set in the 1960's and Billy Elliot, made in 2000 and set in the 1970's. Both of which have the same location, Northern England and both have a strong relation to a working class environment where coal mining was the main source of employment. The films are similar in terms of community, family, and the characterisation of Billy, the central character in both films. The films are different however in terms of setting, action, style and ending, I shall be focusing on all those listed points later in my essay. The main character in both films is called Billy; this is not all they have in common. Firstly both the characters undernourished and come from poor backgrounds. In Kes Billy's father is never around and in Billy Elliot the boy's mother has passed away. They are both the youngest in the family and both have much older brothers that bully, patronise and intimidate them to a great extent. In both films the main characters find their own separate ways in which to escape from their hopeless and challenging life. In Kes this is done through Billy looking after and training a hawk and in Billy Elliot through Billy learning to ballet dance. Examples in the films to support this theory would be in Kes when you see how happy Billy is when training the hawk and the same with Billy when he starts dancing down the street. ...read more.

Jud treats her as a disliked drinking partner. There is also a comparison to make with the two brothers in the families. They are both older than the two Billys at about twenty years old. In Billy Elliot the brother at first appears aggressive towards Billy but gradually we see that he loves Billy although he has difficulty showing this. This is clear form the affectionate two finger salute (swearing) he gives Billy when he goes off to ballet school. In Kes the brother (Jud) clearly doesn't care about Billy at all, he treats Billy as his slave. This is clear when Billy spends Jud's betting money and Judd tries to find him but can't so he kills the kestrel, the only thing Billy really cares about. The main similarity in this point is that both brothers do something unexpected. Billy Elliot's brother supports Billy and at the end goes to watch his ballet. Judd kills the bird. It is also clear that in Billy Elliot they are dependent on each other, yet in Kes they are non-dependant. Examples of dependence in Billy Elliot are the family care for their Grandma. Whereas in Kes Jud doesn't care about his mother or Billy and the mother appears to only concern herself with her children's matters when necessary. When looking at the communities in both films I have found that there are a few key similarities. ...read more.

A strong example of my point would be that the ending of Kes is unresolved, the mother is still unloving and the death of the bird has thrown Billy and Jud further apart. To conclude I feel that Billy Elliot and Kes are two very realistic films. It is rare to have two such similar films, each of a high quality, yet made a generation apart. Considering Kes was made in 1970 and Billy Elliot was made in 2000, it is fair to say that Kes may have influenced the producers of Billy Elliot in making their own film. They could have used some of their ideas (e.g. one parent family) and filming techniques to make there own 'child' story. Obviously the differences (although it does not appear so in my essay) greatly exceed the similarities. However I do feel that it is unusual to have two films with so many similarities, yet if you watched one it may not remind you of the other, this is to their credit. The most similar part of the two films is the main characters (Billy in both cases), because of the way they both retreat to their passionate interest. The most different part of the two films is the families. In Kes they are non-dependent and do not appear to support one another. Yet in Billy Elliot it is very clear that in the end they not only support one another but also care for and love each other, as displayed in the ending of the two films. Joe Leach 19/4/04 ...read more.