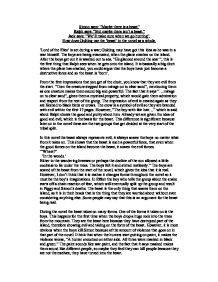 Simon says: "Maybe there is a beast" Ralph says: "But maybe there isn't a beast." Jack says: "We'll make sure when we go hunting". How does Golding use the 'beast' in the novel as a whole. 'Lord of the Flies' is set during a war; Golding may have got this idea as he was in a war himself. The boys are being evacuated, when the plane crashes on the island. After the boys get out it is washed out to sea. "He glanced around the scar ", this is the first thing that Ralph sees when he gets onto the island. It is basically a big ditch where the plane has crashed, you could argue that the boys have just become a destructive force and so the beast is 'born'. From the first impressions that you get of the choir, you know that they are evil from the start. "Then the creature stepped from mirage on to clear sand", mentioning them as one creature makes them sound big and powerful. The fact that it says "...mirage on to clear sand", gives them a mystical property, which would gain them admiration and respect from the rest of the group. The impression of evil is created again as they are likened to black birds or crows. The crow is a symbol of evil so they are branded with evil within the first 17 pages. ...read more.

All three were masked in black and green." The paint sounds like war paint, and the fact that it says masked makes them sound like different people, so maybe they feel they can kill people because they are not themselves, they have turned into the beast. The parachutist takes on the form of the beast when it lands on the island and all the boys get scared of it, they even say that that it is the beast, "It was furry. There was something moving behind its head-wings. The beast moved too-." The boys who said this exaggerate a lot as what they actually saw was a dead man. Maybe they do this because they want respect for fighting a huge beast, but the most likely reason is that it is psychological effect of being on the island. This would then be an argument for the beast being an imaginary thing instead of a physical one. I would say that this is more of a psychological thing because the boys are not used to an environment such as this, therefore they are feeling very insecure and so they are worried about their surroundings. Also, the boys will have been with their parents for their entire lives and so they associate safety with their parents, they are not there so the boys feel unsafe. The boy who sets off the idea of the beast is only small and so would be even more worried than the big boys, this would make him feel even more aware of a beast on the island. ...read more.

This is because it does more harm than good throughout the novel and it is always destroying things. I think that Golding added the beast into the story to add an element of fear and excitement onto the island. It is the main subject that the story revolves around and it is the thing that drives the story along. Without it the story might be quite boring as there would be nothing to motivate the boys and keep the storyline moving. The beast also represents the boy's sanity on the island, for example, when the pigs head takes on the form of the beast, it starts talking to Simon and he starts talking back. This shows that as the story has progressed, the boys have become less sane. When the novel comes to an end, I think that the beast has been destroyed. This is because Ralph's idea with the fire is the idea that gets them off the island and so good has triumphed over evil. This was the idea that some of the group had that the fire would never work. I also think this is helped by the fact that humans come onto the island at the end and brings back all of the security and safety of their homes and parents. This would mean that the beast is completely abolished if the beast is a psychological thing. ...read more.