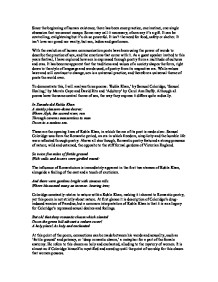 Since the beginning of human existence, there has been once practice,

Since the beginning of human existence, there has been once practice, one instinct, one single obsession that we cannot escape. Some may call it necessary; others say it's a gift. It can be controlling, enlightening but it's oh so powerful. It isn't the need for food, safety or shelter. It isn't love nor greed nor vanity, but sex, ladies and gentlemen. With the evolution of human communication poets have been using the power of words to describe the practice of sex, and the emotions that come with it. As a guest speaker invited to this years festival, I have explored how sex is expressed through poetry from a multitude of cultures and eras. It has become apparent that the traditions and values of a society shapes the form, right down to the style of language and words used, of poetry from its respective era. While values have and will continue to change, sex is a universal practice, and therefore a universal theme of poets the world over. To demonstrate this, I will analyze three poems: 'Kubla Khan,' by Samuel Coleridge, 'Sexual Healing,' by Marvin Gaye and David Ritz and 'Adultery' by Carol Ann Duffy. Although all poems have the same central theme of sex, the way they express it differs quite radically. ...read more.

Blue is generally a color associated with melancholy, and thus perfectly describes a state of emotional sadness. 'Darling I know you'll be there to relieve me / the love you give to me will free me.' Here, sex is seen as calming, sensual, and as a healing process. A major feature of Sexual Healing is repetition. At one point, the words 'Heal me, my darling,' are repeated four times in a row. This is done to emphasize how sex can alleviate anxieties of the soul. Written in an era of flower children, anti-war movements and free love, the song Sexual Healing can be seen as a protest against sexual brutality. American culture of the 70's is reflected in the laid back rhythm, soothing language and overall mood. Social change and society's values are prevalent in the fact that sex is written about so openly. To do so in the Victorian, Romantic, Elizabethan era or even the early 1900's would be completely inappropriate. As time progressed, society's values evolved to the point where people are not fazed by blatant mentions of sex, whether in music, film or literature. 'Adultery,' a poem by Carol Ann Duffy was written in the early 90's and is an example of how society's changing views on sex can be represented through poetry. ...read more.

His wife was there and available to him, yet he went through with the deceit, the lies, and the betrayal all for the same thing twice. Her husband's lust became sinful and his obsession with sex destroyed his marriage, as shown in the line, 'a ring thrown away in a garden.' The mere fact that sex, especially the uglier side of it, can be discussed so bluntly shows just how much society has changed. At first, lust and sex were written about with a very subtle demeanor, as can be seen in 'Kubla Khan.' In contrast, poetry concerning sex became more open in manner as the years went by. The protest against sexual brutality in 'Sexual Healing' would certainly not have been acceptable even two decades before its time, let alone 200 years. Further exposure to lust and sex in the media led to poems such as 'Adultery' being written. This poem's acceptance in contemporary society displays a progression of international maturity in regards to sex, but at the same time the loss of modesty. Ultimately, all poems have differing representations of the same theme, which is shaped by the society of its era. William Wordsworth once said that 'poetry is the spontaneous overflow of powerful feelings.' Lust and sex are among the most powerful feelings that human beings are capable of, and there is no doubt that poets will continue express their passion, elation or anguish on this subject. ...read more.