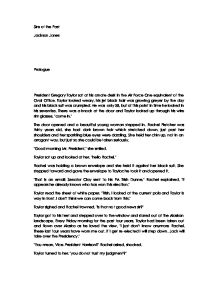 Sins of the Past

Sins of the Past Jackson Jones Prologue President Gregory Taylor sat at his ornate desk in the Air Force One equivalent of the Oval Office. Taylor looked weary, his jet black hair was growing greyer by the day and his black suit was crumpled. He was only 58, but at this point in time he looked in his seventies. There was a knock at the door and Taylor looked up through his wire rim glasses, "come in." The door opened and a beautiful young woman stepped in. Rachel Fletcher was thirty years old, she had dark brown hair which stretched down, just past her shoulders and her sparkling blue eyes were dazzling. She held her chin up, not in an arrogant way, but just so she could be taken seriously. "Good morning Mr. President," she smiled. Taylor sat up and looked at her, "hello Rachel." Rachel was holding a brown envelope and she held it against her black suit. She stepped forward and gave the envelope to Taylor; he took it and opened it. "That is an email; Senator Clay sent to his PA Trish Dunne," Rachel explained, "it appears he already knows who has won this election." Taylor read the sheet of white paper, "Trish, I looked at the current polls and Taylor is way in front. I don't think we can come back from this." Taylor sighed and Rachel frowned, "is that not good news sir?" Taylor got to his feet and stepped over to the window and stared out at the Alaskan landscape. Every Friday morning for the past four years, Taylor had been taken out and flown over Alaska as he loved the view, "I just don't know anymore Rachel. These last four years have worn me out. If I get re-elected I will step down. Jack will take over the Presidency." "You mean, Vice-President Harrison?" Rachel asked, shocked. ...read more.

The killer slowly bent down and placed the electronic device on the floor. Watson smiled, "Now pull your hood down." The killer did not move. "Do it now!" Watson yelled, "Why did you crash Air Force One?" Defoe aimed his pistol at the killer's head, "If you don't answer in five seconds, I will put you down." The killer moved like a bullet and reached into the belt the killer wore and pulled out two silenced pistols and dived at the two men. Watson pulled Defoe out of the way of the bullets and they took cover inside the President's pod. As the killer walked forward and faced them, Watson dived through the air and collided with the killer's midriff. They both flew backward toward the hole in the floor. Both the killer's pistols fell down the hole and Watson's span off to the left. Watson grabbed the killer around the neck, "Let's see who you are." Watson grabbed the killer's hood and pulled it back. He gasped. Under the hood was the beautiful face of Lucy Vasquez, "It can't be." Defoe stepped next to Watson and aimed his pistol down at Lucy's head, "This is your dead partner?" Watson sighed, "Somehow I don't think she's dead." Lucy reached into her pocket and produced a hunting knife and stabbed it into Defoe's leg. Defoe winced with the pain and fell to his knees. She threw Watson off her and dived for his pistol; she took it up and aimed it at Watson's head, "Don't move Rob. I was instructed not to kill you." "Fuck off," Rob smiled, "You were still a trainee. If you want to be a good assassin, you need to learn to look behind you." Defoe had recovered from his leg injury and was aiming his pistol at the back of Lucy's head. "Don't you fucking move!" he warned. Lucy smiled and swung her arm holding the pistol backwards and shot a single bullet into Defoe's chest. ...read more.

Ramirez hesitated, "He's a nice guy." "Don't you dare lie to me!" Alice warned. Ramirez sighed, "The truth is, I don't trust the man." Alice grinned, "That makes two of us." President Jack Harrison was getting ready to take a press conference in the White House press room. He stood in front of the press with dozens of cameras fixed on him. He quickly scanned the peice of paper with his speech on it and set it down onto the podium in front of him. He looked up at the cameras, "My fellow Americans, as I'm sure you are aware, yesterday morning, Air Force One was shot down in Alaska by a group of terrorists. President Taylor was badly injured and at this moment in time, in a coma in the White House medical suite. My senators and I decided to invoke the 25th Amendment which allows the Vice-President and high ranking senators to decide whether the current President is fit to carry out his duties. We decided that President Taylor is not fit for office and has been replaced by myself. There will still be an election next month as planned. I assure you that I will keep you updated with President Taylor's condition. Thank you." The press room erupted with questions being asked by excited journalists. President Harrison exited the room and Shane Lennox took his place at the podium, "President Harrison cannot answer any questions at this time. To keep updated or to find out more about the 25th Amendment, go to the White House website. Thank you." Harrison sank against the wall when he exited the press room. A Secret Service Agent walked over to him, "Are you alright Mr. President?" Harrison nodded, "I'm just a bit shell shocked. That's all." Lennox exited the press room and stared at Harrison, "Are you okay sir?" Harrison nodded, "I think I just need a glass of water." Lennox nodded, "Come on, I'll take you." Lennox led Harrison down the corridor toward his personal kitchen, closely followed by a Secret Service Agent. ...read more.