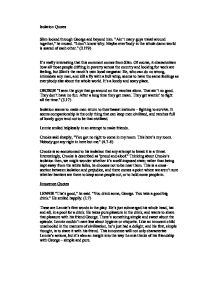 Slim looked through George and beyond him - analysisng selected quotations from &quot;Of Mice and Men&quot;.

Slim looked through George and beyond him. "Ain't many guys travel around together," he mused. "I don't know why. Maybe ever'body in the whole damn world is scared of each other." (2.179) Isolation Quotes It's really interesting that this comment comes from Slim. Of course, it characterizes how all those people drifting in poverty across the country and looking for work are feeling, but Slim's the ranch's own local megastar. He, who can do no wrong, intimidate any man, and kill a fly with a bull whip, seems to have the same feelings as everybody else about the whole world. It's a lonely and scary place. GEORGE "I seen the guys that go around on the ranches alone. That ain't no good. They don't have no fun. After a long time they get mean. They get wantin' to fight all the time." (3.17) Isolation seems to make men return to their basest instincts - fighting to survive. It seems companionship is the only thing that can keep men civilized, and ranches full of lonely guys tend not to be that civilized. Lennie smiled helplessly in an attempt to make friends. Crooks said sharply, "You got no right to come in my room. ...read more.

Friendship shouldn't be a kind of prison, but rather a voluntary bond. George knows the difference. Lennie said, "I thought you was mad at me, George." "No," said George. "No, Lennie, I ain't mad. I never been mad, and I ain' now. That's a thing I want ya to know." (6.87-88) George doesn't kill Lennie out of anger, but he doesn't seem to do it out of justice, either. It seems that George has no choice but to kill Lennie. The same way George has protected and guided Lennie throughout life, he now leads him into death. George is confined by choice, and Lennie is freed by death. Justice GEORGE "Lennie-if you jus' happen to get in trouble like you always done before, I want you to come right here an' hide in the brush... Hide in the brush till I come for you." (1.130) George knows even before they go to the new ranch that Lennie is bound to get into some trouble. He even says it's a foregone conclusion, as it's what Lennie has always done before. We get an insight into George's sense of justice here: no matter what Lennie does, George is willing to meet in the brush and presumably run off again with him, just like they left Weed. ...read more.

Candy's power comes in the form of the $300 he received as compensation for the accident he suffered on the ranch. His weakness is that, regardless of the money, he is now missing a hand, which keeps him from being able to work well. Candy understands that he'll soon be useless to himself and others. She stood in front of Lennie and put her hands on her hips, and she frowned disapprovingly at him. And when she spoke, it was in Lennie's voice. "I tol' you an tol' you," she said. "I tol you, 'Min' George because he's such a nice fella an' good to you.' But you don't never take no care. You do bad things." (6.10) Lennie's hallucinations seem to fully reflect Lennie's real weaknesses and fears. Aunt Clara talks about how Lennie would never run away because he's dependent on George. The big scary rabbit preys on Lennie's fear Crooks brought up -- that George might outgrow Lennie and leave him. It makes the audience wonder whether Lennie has, stored away in his consciousness, knowledge of what he's done wrong and deeper knowledge of himself. Perhaps he just lacked the good sense to access it, and now that he has, something irreparable has happened. Lennie as we know him - slow, but mostly sane - might have lost some of his sanity after he killed Curley's wife. Of course, there is no way to know for sure. ...read more.