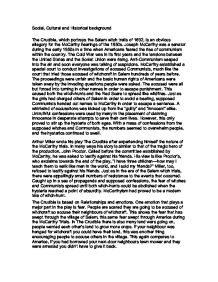 Social, Cultural and Historical background of The Crucible.

Social, Cultural and Historical background The Crucible, which portrays the Salem witch trails of 1692, is an obvious allegory for the McCarthy hearings of the 1950s. Joseph McCarthy was a senator during the early 1950s in a time when Americans feared the rise of communism within the country. The Cold War was in its first years and the tensions between the United States and the Soviet Union were rising. Anti-Communism seeped into the air and soon everyone was talking of suspicions. McCarthy established a special court to conduct investigations of accused Communists, much like the court that tried those accused of witchcraft in Salem hundreds of years before. The proceedings were unfair and the basic human rights of Americans were taken away by the invading questions people were asked. ...read more.

Arthur Miller wrote his play The Crucible after experiencing himself the nature of the McCarthy trials. In many ways his story is similar to that of the tragic hero of the production, John Proctor. Called before the committee established by McCarthy, he was asked to testify against his friends. His view is like Proctor's, who exclaims towards the end of the play, "I have three children-how may I teach them to walk like men in the world, and I sold my friends?" Miller, too, refused to testify against his friends. Just as in the era of the Salem witch trials, there were appallingly small numbers of resistance to the events that occurred. Caught up in a sea of propaganda and supposed confessions, the fear of witches and Communists spread until both witch-hunts could be abolished when the hysteria reached a point of absurdity. ...read more.

People found many reasons to accuse each other of witchcraft and hysteria was quickly created. Many people did it because of jealousy; Abigail wanted to get Elizabeth Proctor killed because she was in love with John. Although John Proctor has confessed a sin he still seems to be the Hero of the play. The play would not really work if he were not. John wants to die an innocent man rather than live a guilty one, This poses a problem as the courts know he is innocent, however if they let him live they will risk losing their authority so they must hang him as he didn't confess. The play shows us a lot about The Salem Witch trials is also is a good allegory to the horrors of America! ...read more.