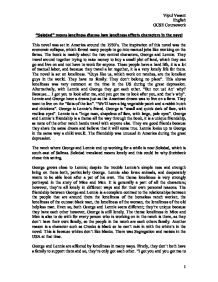 "Soledad" means loneliness discuss how loneliness affects characters in the novel This novel was set in America around the 1930's. The inspiration of this novel was the economic collapse, which forced many people to go into manual jobs like working on the farms. The book is mainly about the two central characters, George and Lennie. They travel around together trying to raise money to buy a small plot of land, which they can go and live on and not have to work for anyone. These people have a hard life, it is a lot of manual labor, and because they travel a lot together, it is a very lonely life for them. The novel is set on loneliness. "Guys like us, which work on ranches, are the loneliest guys in the world. They have no family. They don't belong no place". This shows loneliness was very common at the time in the US during the great depression. Alternatively, with Lennie and George they got each other. "But not us! An' why? Because... I got you to look after me, and you got me to look after you, and that's why". Lennie and George have a dream just as the American dream was to live on a farm. They want to live on the "fatta of the lan". "We'll have a big vegetable patch and a rabbit hutch and chickens". ...read more.

"I been around him so much I never notice how he stinks". Eventually and against his will, he agrees and they take the dog outside, and he is shot in the back of the head. Now that his dog is, gone Candy's has nothing to look forward to and now his only friend has gone life is almost empty for him. This could be one of the reasons why he buys his way into George and Lennie's dream by offering those most of the capital to buy their plot of land to try and secure something better in life for him. Also, he offers to give a hand on the new plot of land, so that they feel he is actually doing something towards helping them with their dream. Candy's initial concern after the shock of Curleys wife's death is for his future, he's terrified of being lonely, "the little fat stove ... an' the rain comin'...an' us jus' settin' there.' His eyes blinded with tears". The dream of living of the "fatta of the lan" is shattered. Similarly, Crooks is a black man, he is called this because he has a crooked back. He is the only black man on the ranch and has his own room because he is not allowed in the bunk-house because of his colour. This was typical of the 1930's America, as black people were thought of as less important than others. ...read more.

He was described, as "his hatchet face was ageless". He was known as the "prince of the ranch". "His voice was gentle". He's the ideal combination of tough, mainly exterior, and gentle, thoughtfulness interior. He worked on the farm; he was very skilled and was not replaceable. Unlike some of the workers, he was very secure in his job, because of his calm nature he is like and trusted by his fellow workers. There are quite a few workers who have been working on the farm but their jobs are not as secure as Slim's. Slim in the novel is shown to be lonely as he says, "I hardly never seen two guys travel together. You know how the hands are ... never seem to a damn about nobody". Steinbeck purposely shows that this character doesn't know anything about the outside world by putting him in this position. It also shows how he doesn't care about interring with anyone. Whit is also another character who is lonely in the ranch. "jus the usual thing we go into old suzy's place hell of a nice place". This is a cat house they go to for female affection. This shows that Whit is lonely as his expression shows it's the best place he has been to ever. He is also lonely as he has no family just plays horse shoes with others, and also goes town with others. ?? ?? ?? ?? Vipul Vasant English GCSE Coursework 1 ...read more.