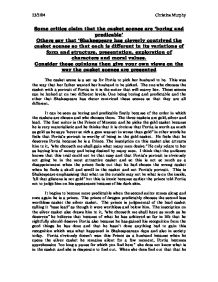 Some critics claim that the casket scenes are 'boring and predicable', Others say that 'Shakespeare has cleverly contrived the casket scenes so that each is different - Consider these opinions then give your own views.

Some critics claim that the casket scenes are 'boring and predicable' Others say that 'Shakespeare has cleverly contrived the casket scenes so that each is different in its variations of form and structure, presentation, exploration of characters and moral values. Consider these opinions then give your own views on the way the casket scenes are presented The casket scene is a set up for Portia to pick her husband to be. This was the way that her father wanted her husband to be picked. The one who chooses the casket with a portrait of Portia in it is the suitor that will marry her. These scenes can be looked at on two different levels. One being boring and predictable and the other that Shakespeare has clever contrived these scenes so that they are all different. It can be seen as boring and predicable firstly because of the order in which the caskets are chosen and who chooses them. The three caskets are gold, silver and lead. The first suitor is the Prince of Morocco and he picks the gold casket because he is very materialistic and he thinks that it is obvious that Portia is worth as much as gold as ...read more.

The Prince of Aragon's speech is self -centered, full of snobbery and deceit for example, "I will not choose what many men desire Because I will not jump with common spirits, And rank me with the barbarous multitudes" But with Bassanio Portia talks a lot with the longest speeches we have herd her say so far. She rambles on, and doesn't make sense which adds to the boredom of these scenes. By Portia only expressing these long meaningless speeches it also gives the casket scenes a sense of variation which is one of the reasons why some critics feel that Shakespeare has cleverly contrived some variations in the casket scenes. In the first two casket scenes Portia was not interested in the princes as soon as they arrived she wanted to get rid of them also in the first two casket scenes she makes a comment when they leave after choosing the wrong casket for the Prince of Morocco she says "a gentle riddance" and for the Prince of Aragon she comments "Thus hath the candle singed the moth. O, these deliberate fools! ...read more.

Bassanio's character becomes a bit muddled because of the contradictions that he says, and we cannot workout weather he is materialistic or not. But we certainly see how smart Bassanio is through his long speeches and his realisation of the appearances being deceptive. Through moral values each scene is varied. In act 2 Scene & with the Prince of Morocco, his moral value appears to be that he picked the gold casket was because of the idea that everything he wants has to be the best of the best. Like the way he praises Portia "mortal breathing saint" etc. The Prince of Aragon's choice of the silver casket was also led by his moral values he didn't want to choose the lead casket because he felt that it was lower than him. He also dismissed the gold casket because he didn't socially want to be like everyone else and desire what other men desire. I think that the casket scenes are more boring and predictable than cleverly contrived because on reading the scenes I felt that it was repetitive in the way that they choose the caskets and singled them out and not cleverly contrived as some critics suggest. ?? ?? ?? ?? 23/3/04 Christina Murphy ...read more.