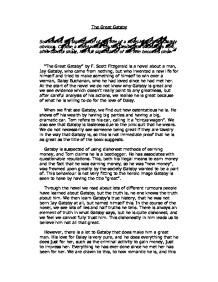 The Great Gatsby Sometimes the significance of the title of a novel is not immediately obvious. Choose a novel which fits this description and shows how, after careful study, the full significance of the title becomes clear. "The Great Gatsby" by F. Scott Fitzgerald is a novel about a man, Jay Gatsby, who came from nothing, but who invented a new life for himself and tried to make something of himself to win over a woman, Daisy Buchanan, who he had loved since he had met her. At the start of the novel we do not know why Gatsby is great and we see evidence which doesn't really point to any greatness, but after careful analysis of his actions, we realise he is great because of what he is willing to do for the love of Daisy. When we first see Gatsby, we find out how ostentatious he is. He shows off his wealth by having big parties and having a big, dramatic car. ...read more.

We then learn Gatsby's true history, that he was not born Jay Gatsby at all, but named himself this. In the course of the novel, we see lots of lies and half truths he tells. There is always an element of truth in what Gatsby says, but he is quite dishonest, and we feel we cannot fully trust him. This dishonestly in him leads us to believe him not all that great. However, there is a lot to Gatsby that does make him a great man. His love for Daisy is very pure, and he does everything that he does just for her, such as the criminal activity to gain money, just to impress her. Everything he has ever done since he met her has been for her. We are drawn to this, to how romantic he is, and this makes him great because this makes us be on his side. ...read more.

The arguably greatest thing about Gatsby is that he is prepared to follow his dream as far as is required for as long as possible, through anything. For years he follows his love for Daisy and his quest to make a lot of money to win over Daisy. He never sways from this romantic idea of taking her away and pretending the last five years of his and her life never existed. This naivety and single mindedness makes him lovable and shows how much of a "great" character he is. In conclusion, when we first meet Gatsby he, despite the title of the novel, does not seem all that great. As the novel progresses, however, we see the different side of Gatsby, the side which loves Daisy so utterly and completely and follows her like a dream he can never attain, which shows us how great he really is, in the end. Gatsby himself is not a great character in what he does, but it is what he has in his heart that's great. ?? ?? ?? ?? ...read more.