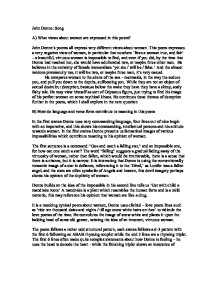 Song - What views about women are expressed in this poem?

John Donne: Song A) What views about women are expressed in this poem? John Donne's poems all express very different views about women. This poem expresses a very negative view of women, in particular that nowhere `lives a woman true, and fair' - a beautiful, virtuous woman is impossible to find, and even if you did, by the time that Donne had reached her, she would have adulterated two, or maybe three other men. He believes in the certainty of female immoralism `yet she / will be / false.' And the almost random promiscuity too, it will be two, or maybe three men, it's very casual. He compares women to the sirens of the sea - mermaids, in the way the seduce you, and pull you down to the depths, suffocating you. While they are not an object of sexual desire but deception, because below the waist they have they have a slimy, scaly fishy tale. ...read more.

It is a mocking cynical poem about women, Donne uses clich�d - love poem lines such as `ride ten thousand daies and nights / till age snow white hairs on thee' to ridicule the love poems of the time. He convolutes the image of snow white and places it upon the balding head of some old geezer, twisting the idea of an innocent, virtuous woman. The poem follows a rather odd structural pattern, each stanza follows a 6-3 pattern with the first 6 following an ABAB rhyming couplet while the end 3 lines are a rhyming triplet. The first 6 lines often make quite complex statements about how Donne is feeling - he uses the head to decode the heart - while the finishing triplet shows an insistence of opinion, it emphasizes the points being made but also creates a lilting rhythm to the end of each verse, like the chorus to a song. ...read more.

Donne compares his love to water rippling out wards `Produc'd by one, love such additions take.' One drop in a pond will cause rippling outwards - it continues to grow. He compares the circles to spheres of the heavens, but he says `they are all concentrique unto thee.' This is a great metaphor for defining love, he feels that his lover is the centre on the heavens and outshines everything, the years passing to nothing bar `adde to love new heate.' His love may increase through springtime but never abates through bad times, "No winter shall abate the springs encrease.' Donne suggests that it cannot abate, he compares his growing love as too the infiniteness of the sky and the stars, which would have been never anything less than infinite in those times. Here we can see Donne as a simplistic adolescent, when he is in love he can never see it ending, while when he is feeling bad all women are evil and he will never go out with one again. ...read more.