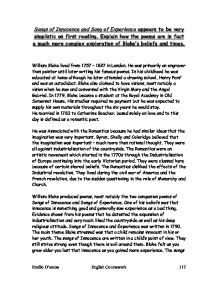 Songs of Innocence and Song of Experience appears to be very simplistic on first reading. Explain how the poems are in fact a much more complex exploration of Blake(TM)s beliefs and times.

Songs of Innocence and Song of Experience appears to be very simplistic on first reading. Explain how the poems are in fact a much more complex exploration of Blake's beliefs and times. William Blake lived from 1757 - 1827 in London. He was primarily an engraver then painter until later writing his famous poems. In his childhood he was educated at home although he later attended a drawing school, Henry Pars' and was an autodidact. Blake also claimed to have visions, most notably a vision when he saw and conversed with the Virgin Mary and the Angel Gabriel. In 1779, Blake became a student at the Royal Academy in Old Somerset House. His studies required no payment but he was expected to supply his own materials throughout the six years he would stay. He married in 1783 to Catherine Boucher, based solely on love and to this day is defined as a romantic poet. He was Associated with the Romantics because he had similar ideas that the imagination was very important. Byron, Shelly and Coleridge believed that the imagination was important - much more then rational thought. They were all against industrialisation of the countryside. The Romantics were an artistic movement which started in the 1770s through the Industrialisation of Europe continuing into the early Victorian period. They were classed here because of certain shared beliefs. The Romantics disliked the effects of the Industrial revolution. They lived during the civil war of America and the French revolution, due to the sudden questioning in the role of Monarchy and Church. William Blake produced poems, most notably the two companion poems of Songs of Innocence and Songs of Experience. One of his beliefs was that innocence is something good and generally saw experience as a bad thing. Evidence shows from his poems that he detested the expansion of industrialisation and very much liked the countryside as well as his deep religious attitude. ...read more.

Blake has done this because of the controversy around the role of the church and monarchy and is an indication of someone who is experienced to question the role of church and monarchy. The Comparisons between the two is that they both contain metaphors prophesizing a most likely death. The Songs of innocence also has dark colour imagery inside the metaphor, "Were all of them lock'd up in coffins of black." The "black" being themselves covered in soot and "lock'd" inside the chimneys, as was a lot of boys misfortunes. The Songs of experience shows the child knowing what his parents have done to him and is aware of a possible death. "They clothed me in the clothes of death". The metaphor also shows that he was "clothed" from the real world during his younger years of innocence, meaning he felt he was living a lie. Further colour imagery is used in the songs of innocence such as, "cannot spoil your white hair", white symbolising something pure as well as in the fourth stanza when the children "naked and white", go and "wash in a river, and shine in the sun". Here Blake uses pastoral imagery to make the countryside seem like a heaven and uses more themes of religion linking "naked and white" to Adam and Eve, where they "wash in a river, and shine in the sun", this being the Garden of Eden. Blake is using the innocence and naivety of Adam of Eve to link this with the Children. The colour imagery in the chimney sweeper from Songs of experience relates to darkness in a "black thing among the snow." This meaning the soot covered child is an oddity among everyone else. Blake stresses that he is all alone among the world and tries to win the readers sympathy. Using the word "snow", Blake has used the snows property of being cold to portray society's ill attitude to life. ...read more.

Blake is saying the children will endure hardship like this but when the die they will go straight to heaven. Comparisons between the two are that in the last line of the third stanza of the Songs of Experience version, "It is eternal winter there," describes how the children see the ceremony from the experienced point of view. This is different from Holy Thursdays of the Songs of innocence. The last stanza of the Songs of Experience version links to the "winter" by saying that when the sun shines and the rain doesn't fall, there "can never hunger there" and "Nor poverty". But in winter the sun does not shine and rain does fall, so therefore Blake is saying there is hunger and there is poverty. The Songs of innocence version portrays the children as "flowers of London town", this gives a good mood of the imagery for the children. But The Songs of Experience version opposes this mood as "their fields are bleak & bare" which both quotes touch on pastoral imagery. The experience of the children has lead them to become miserable as the adults and are "bleak and bare" physically and mentally. In general, Holy Thursday is meant to be a joyous occasion as Blake writes about the children in Songs of innocence but the exploitation by the powerful minority has demoralised the poor majority and this foul mood on such an occasion is shown in Holy Thursday from Songs of Experience. William Blake died in 1827. Blake wrote Songs of Innocence and Experience to show the world the bad deeds that society had created, expanding on matters he felt important like religion and morality, child labour and cruelty. It is true that Songs of Innocence and Songs of experience are very complex and Blake has done a good job of helping the reader understand the complexity by using his powerful use of imagery and language and William Blake has definitely expressed his beliefs well though his poems. ?? ?? ?? ?? Emilio D'souza English Coursework 11T ...read more.