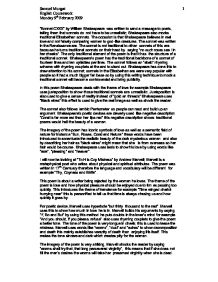 Sonnet CXXX by William Shakespeare and To His Coy Mistress by Andrew Marvell compared.

"Sonnet CXXX" by William Shakespeare was written to send a message to poets, telling them that sonnets do not have to be unrealistic; Shakespeare also mocks traditional Elizabethan sonnets. The occasion is that Shakespeare believes in real love and not falsely comparing women to god-like creatures. The sonnet was written in the Renaissance era. The sonnet is not traditional to other sonnets of this era because he turns traditional sonnets on their head by saying "no such roses see I in her cheeks". The only traditional element of the poem is that it has the structure of a traditional sonnet. Shakespeare's poem has the traditional backbone of a sonnet of fourteen lines and ten syllables per lines. The sonnet follows an "abab" rhyming scheme with rhyming couplets at the end to stand out. Shakespeare has done this to draw attention to his sonnet; sonnets in the Elizabethan era were very popular with people so it had a much bigger fan base so by using this writing technique to mock a traditional sonnet will become controversial and bring publicity. ...read more.

For poetic device, Marvell uses hyperbole "but thirty thousand to the rest". Marvell uses this to show how much in love he is in. Marvell builds his arguments by saying "If, So and But" by using this method he puts doubts in the lover's mind for example "And you should, if you please, refuse" also uses rhyming couplets to give the poem a better tone. The tone of the poem is very tongue in cheek; this is used to tease the mistress. Marvell uses words like "worms", "dust" and "ashes" to show decomposition and death this mainly establishes veracity of death than enjoying life itself. This makes the tone sincere and dark which creates pity for the woman. The imagery of the poem is very striking, Marvell shocks the reader by saying "worms shall try that, that long persevered virginity", this means that if she does not fill the man's desires the worms will take her preserved virginity when she is dead. Marvell says this to convince the mistress to change her mind; this is shocking because it talks about the lust of a man who is persuading and pressurising the woman into sexual activity. ...read more.

The imagery which I particularly enjoyed was the personification of time in Marvell's poem like "Time's winged chariot" it gives the poem a certain degree of urgency. Also the harsh imagery gave the poem a clearer, vivid picture. In "Sonnet CXXX" by William Shakespeare, the uses of iconic symbols of love are strong and unique "And yet, by heaven, I think my love as rare". The poem which I personally prefer is "To His Coy Mistress" by Andrew Marvell. I chose this poem because it tells the unexpected and as I said above it shocks the reader, also bringing humour, in my opinion that's what "Sonnet CXXX" failed to do. But on the other hand "Sonnet CXXX" is a very unique and untraditional sonnet with it is own style which is hard to duplicate. With regards "To His Coy Mistress" you can understand the passion and commitment of the writer in the first and second verses like "Two hundred to adore each breast". We understand how he feels because Marvell writes as if he is desperate for his lovers' affection. Samuel Mungai 1 English Coursework Monday 9th February 2009 ...read more.