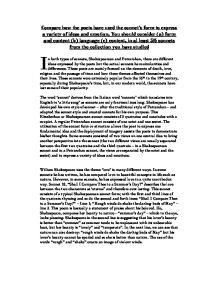 Compare how the poets have used the sonnet's form to express a variety of ideas and emotion. You should consider (a) form and content (b) language (c) context, in al least 5/6 sonnets from the collection you have studied I n both types of sonnets, Shakespearean and Petrarchan, there are different ideas expressed by the poets but the actual sonnets have similarities and differences. These poets are mainly focused on the elements of death, love, religion and the passage of time and how these themes affected themselves and their lives. These sonnets were extremely popular from the 16th to the 19th century, especially during Shakespeare's time, but, in our modern world, the sonnets have lost some of their popularity. The word 'sonnet' derives from the Italian word 'sonneto' which translates into English to 'a little song' as sonnets are only fourteen lines long. Shakespeare has developed his own style of sonnet - after the traditional style of Petrarchan - and adapted the sonnet style and created sonnets for his own purpose. This Elizabethan or Shakespearean sonnet consists of 3 quatrains and concludes with a couplet. A regular Petrarchan sonnet consists of one octet and one sestet. The utilization of the sonnet form or structure allows the poet to express one fundamental idea and the deployment of imagery assists the poets to demonstrate his/her thoughts. Some sonnets consisted of two views on one central idea to bring another perspective into the sonnet (the two different views are usually separated between the first two quatrains and the third quatrain - in a Shakespearean sonnet and in a Petrarchan sonnet, the views are separated by the octet and the sestet) and to express a variety of ideas and emotions. William Shakespeare uses the theme 'love' in many different ways. ...read more.

"How Do I Love Thee?" is a Petrarchan sonnet written by Elizabeth Barrett Browning in the 19th century. It contains an iambic pentameter - rhyming a-b-b-a, a-b-b-a, c-d-c, d-c-d. In the octet, the poet addresses her general theme - in the sestet she presents her conclusion. This sonnet is about love and spirituality (religion). There are different interpretations of this sonnet, about who is addressed to - God or Jesus or her loved one. Possibly, it is not addressed to God as in the penultimate line, it says "and, if God choose" and so you would not state that phrase if it was addressed to God. Considering if it is addressed to her loved on, How do I Love Thee is an answer to the stereotypical male question to his loved one: how much do you love me? The poet's response in the first line is almost satirical: "how do I love thee? Let me count the ways..." almost as though she has thought of the answer before. In fact, browning uses the repetition of "I love thee" eight times finally ending with "I shall but love thee". The first stanza is about religion and spirit as she says the words: "soul" and "ideal Grace" which may suggest that she is religious. In the second stanza, it's about more everyday things: "candlelight". The word "Right" can be interpreted in some ways. It could mean to perform good deeds or perhaps to choose who to love. She includes more religious quotes, "as they turn from Praise". In the next stanza, she continues to say the ways in which she lovers her lover. "And with my childhood's faith" suggests that she was religious as a child or possibly to be innocent as a child reflects innocence. ...read more.

How can death die itself? In this poem Donne is creating a message that death will not succeed in the end and life goes on spiritually. People at the time were afraid of death and John Donne wrote this poem pitying death. As he believes in the afterlife, he says "wee wake eternally" as our life continues and nothing can stop it and so his religious beliefs have an impact on his view about death. John Donne is mocking death and insults death and destroys its power. In this poem, we can see that Donne has used the sonnet form to create a strong view on death as just a moment in our life and fate and chance decide death, not death itself. Although I have found the study of these sonnets challenging, I have rather enjoyed reading them. The subject-matter of these sonnets is serious but of real interest. Shakespeare's two love sonnets were rather intriguing because in one sonnet he seems to by mocking the style of other sonnets; My Mistress Eyes. Christina Rossetti's "Remember" has, in my opinion, conveyed a message of importance - that she does not want her loved ones to be sad about her death - and this is a brave poem. Finally, I admired John Donne's attack on Death: the poem has a healthy attitude to dying and living. Perhaps poets today find sonnet writing too restrictive in terms of form because it allows the writer to have more freedom to convey his/her message and also that sonnet writing has become out of fashion. This may be because medical advancement since the Second World War has caused writing sonnets about death to almost deteriorate because nowadays, we can cure diseases and so it is not a major issue anymore. So, modern poets today write serious and challenging poetry but not in sonnet form. ?? ?? ?? ?? ...read more.