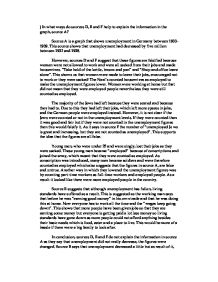 ) In what ways do sources D, E and F help to explain the information in the graph, source A? Source A is a graph that shows unemployment in Germany between 1933-1939. This source shows that unemployment had decreased by five million between 1932 and 1938. However, sources D and F suggest that these figures are falsified because women were not allowed to work and were all sacked from their jobs and made housewives. "Take hold of the kettle, broom and pan" and "Shop and office leave alone". This shows us that women were made to leave their jobs, encouraged not to work or they were sacked! The Nazi's counted housewives as employed to make the unemployment figures lower. Women were working at home but that did not mean that they were employed people nevertheless they were still counted as employed. The majority of the Jews had left because they were scared and because they had to. Due to this they had left their jobs, which left more spaces in jobs, and the German people were employed instead. However, it is not clear if the Jews were counted or not in the unemployment levels. If they were counted then it was good and fair but if they were not counted in the unemployment figures then this would falsify it. As it says in source F the number of "unemployed Jews is great and increasing, but they are not counted as unemployed". This supports the idea that the figures are all false. Young men, who were under 25 and were singly, lost their jobs as they were sacked. These young men became "employed" because of conscriptions and joined the army, which meant that they were counted as employed. ...read more.

She is not careful of what she says to the Inspector, an example is everything she says about the man who got Eva pregnant and how he is fully to blame and totally responsible. She is a na�ve women who does not even know about her own son's well being or that people like Alderman Meggarty harass women in palace bars. She thinks that she is always right and calls the Inspector "impertinent" which shows us what she feels of everyone in her surroundings. Priestley intended to get across this character as a selfish, snobby and small-minded woman so that the audience would not feel empathy with her. Eric Birling is a heavy drinker and is a regular in the palace bar. He cared for Eva and tried to help her. He tried to do what was morally right even if he did not accomplish it. He is like his sister Sheila; they both still felt that they had done something wrong during their life even if it did not result in a girl's death. Priestley shows through the characters of both Eric and Sheila that the younger generation during the Edwardian period were the 'better' generation as they were not so 'up-tight' about themselves and had feelings for the unfortunate. The Inspector is one of the characters that I feel Priestley conveyed to the audience very well. He is someone who feels a lot for the poor and is prepared to do everything that is right for the less privileged. He is a very clever man who manages to get all of the people present to admit what they did by opening the characters' personalities. ...read more.

Mrs Birling is totally shocked, whereas Mr Birling, though taken back, is not as shocked by the upper class young men's behaviours. This shows that the older generation women of the upper class are more trusting on the men's behaviour, and assume that they have stronger morals, then they actually do. I think that JB Priestley presents the social issues of the Edwardian period in this play through the characters and their way of speaking. He shows us what the upper class, rich business man of the time like Mr Birling were like during the time. He tells us about people like Mrs Birling who cannot tolerate rudeness, or that is what she thinks it is. She is someone who thinks that she is always right and she is too protective over her children who are at the age of being able to marry. We get to see what the younger generation of the time were like and how they reacted to situations like in the play itself. They are very different to their parents and are more social and more humane. We also get to see what people like the Inspector were like and their way of thinking. The inspector believed in a socialist philosophy and believed that everyone should look after everyone else, whether they are rich or poor. Priestley also presents the poorer social issues of the time. People like Eva Smith herself who was so easily sacked from her jobs for minute reasons; and also how girls like her turned to prostitution to earn some money for their bare needs. Then finally Priestly shows us people like Edna, who is the maid and how she is treated. He presents this all to us through the language, which the characters use, and how they react to situations and what they feel. ...read more.