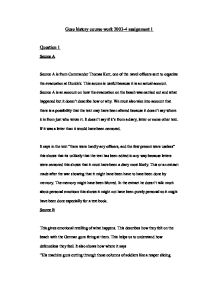 Source based work on The evacuation at Dunkirk.

Gcse history course work 2003-4 assignment 1 Question 1 Source A Source A is from Commander Thomas Kerr, one of the navel officers sent to organize the evacuation at Dunkirk. This source is useful because it is an actual account. Source A is an account on how the evacuation on the beach was carried out and what happened but it doesn't describe how or why. We must also take into account that there is a possibility that the text may have been altered because it doesn't say where it is from just who wrote it. It doesn't say if it's from a diary, letter or some other text. If it was a letter than it would have been censored. It says in the text "there were hardly any officers, and the few present were useless" this shows that its unlikely that the text has been edited in any way because letters were censored this shows that it must have been a diary most likely. This or an extract made after the war showing that it might have been have to have been done by memory. ...read more.

Source C This source is not good for describing what happened what the battle of Dunkirk was like. This source sounds like a war story on one event that happened it doesn't give you any other information it doesn't even tell you if the captain lives. This source doesn't tell you what Dunkirk was it does tell you that it was a hard battle. This source does tell. It does not fully explain what some of the words used are a Bren gun is (a light machine gun). This story may have been for a newspaper as most information about the war was limited. I think this because it's unlikely that one man with a light machine guns would be able to turn away eight heinkels. Also it doesn't mention the great amount of people on the beach just this one mans effort to turn away planes. We must also take into account that in source c it calls the man brave but it leave the story unfinished. What if he was killed and he was successful in driving them off he still would have been a war hero and the facts may have been embellished. ...read more.

Although they are not being rescued they are still strong. They where trapped between the German forces and the channel. Source F This shows British troops firing at German aircraft at Dunkirk. This shows the battle of Dunkirk as a disaster. They are almost like sitting ducks to the planes. As I have said before they where between German forces and the channel. Made this an almost impossible fight and the losses where great. In the photo you see a couple of soldiers looking up trying to aim there guns at the planes. The planes had better fire power speed and armor. This doesn't show great military leadership also. Source G This shows the battle of Dunkirk as a great deliverance. It shows the British Expeditionary Force as not a handful of men broken by the conditions and German forces but as a strong body of seasoned veterans. It shoes them as being strong spirited and experienced. It also says that there refusal to accept defeat is the `guarantee of final victory' but a big worry that the entire British army (over 300,00 troops) could be wiped out before the war really got under way. ...read more.