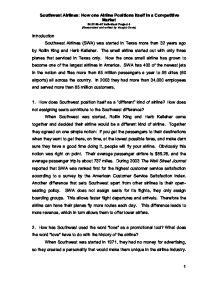 Introduction Southwest Airlines (SWA) was started in Texas more than 32 years ago by Rollin King and Herb Kelleher. The small airline started out with only three planes that serviced in Texas only. Now the once small airline has grown to become one of the largest airlines in America. SWA has 400 of the newest jets in the nation and flies more than 65 million passengers a year to 59 cities (60 airports) all across the country. In 2003 they had more than 34,000 employees and served more than 65 million customers. 1. How does Southwest position itself as a "different" kind of airline? How does not assigning seats contribute to the Southwest difference? When Southwest was started, Rollin King and Herb Kelleher came together and decided their airline would be a different kind of airline. Together they agreed on one simple notion: If you get the passengers to their destinations when they want to get there, on time, at the lowest possible fares, and make darn sure they have a good time doing it, people will fly your airline. ...read more.

As a result of all the love, in 1977 their symbol on the New York Exchange became LUV. Once they had the money to advertise, their first ads, in which the word "love" appeared up to 18 times, announced, "There is someone up there who loves you". More than 32 years later the LUV is still flourishing at Southwest Airlines and has become one of their core values. They succeed by treating not only their customers, but their employees as well with love and respect. In fact, the love doesn't stop there; approximately 2,000 Southwest employees have spouses who also work for the company. Last but not least, the home base of Southwest is, of course, Love Field in Texas. 3. What does Southwest mean when it promotes itself as a "triple crown winner?" How has Southwest used its awards to advertise itself as different from other airlines? In 1988 SWA was the first airline to win the coveted Triple Crown for a month for Best On-time Record, Best Baggage Handling, and Fewest Customer Complaints. Since then, they have won the award more than thirty times. ...read more.

During 2002 Southwest began to gradually do away with reusable plastic boarding cards and start implementing the Automated Boarding Pass. This gave customers the "Freedom of Choice" to obtain their Boarding Passes at the curb, ticket counter, gate, or self-service kiosk. These changes have minimized lines at the ticket counters and gates and also allowed Customer Service agents to attend to those customers who have questions or special needs. The Automated Boarding Pass also eliminated the need to stand in a second line at the gate after customers checked their bags at the curb or ticket counter, and improved Southwest's ability to comply with important government security mandates. Even with SWA's website, frequent flyer program, ticketless travel, and various other programs, Southwest's Technology Department continue to work behind the scene towards maintaining a positive experience for their customers. Their tireless effort and dedication to the customer is the reason why they stand out among their competitors. An excellent example set to be followed by all airlines across the nation. Reference: http://www.southwest.com/ ?? ?? ?? ?? Southwest Airlines: How one Airline Positions Itself in a Competitive Market BUS105-57 Individual Project 4 (Researched and written by Vaughn Davis) 1 ...read more.