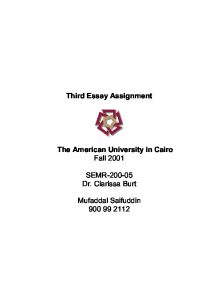 Third Essay Assignment The American University in Cairo Fall 2001 SEMR-200-05 Dr. Clarissa Burt Mufaddal Saifuddin 900 99 2112 "Specifically" Universal No longer is an individual part of a society that is bounded by a tribal fence - where all its inhabitants share the same culture, norms and identity that are inherited unchanged by generation after generation. Values are more difficult to blindly accept since an individual's outlook is no longer confined to the fences of his tribe, and not all the aspects of his specific culture remain consistent with the universal domain he now confronts. In other words - in light of the 21st century individuals are constantly faced with decisions that ask them to either side with tradition or globalization. Girls at War and Other Short Stories by Nigeria's ebullient Achebe, An Egyptian Childhood, by Egyptian thinker Taha Hussein and Un Chien Andalou by surrealist artists Luis Bunel and Salvador Dali are texts that contain culturally specific material but also have a universal appeal. How these texts work as art for a culturally specific audience and how they work for a world audience is largely based on the outlook of the author and reader, in addition to where their outlooks unionize. Nevertheless, one can still attempt to interpret the degree to which these texts are culturally specific or universally appealing through one's own outlook, which is what I shall attempt to do through the course of my essay. Chinua Achebe, one of Africa's most celebrated writers does not only tackle this dilemma in his short stories but also confronts it in reality - notably his choice of language that he uses in his texts, which is the language of the colonizer. He chooses English, which is not Nigeria's native tongue even though his main audience are Africans. "The worst thing that can happen to any people is the loss of dignity and self respect. ...read more.

In the capital, Lagos on the other hand it how well Nene balanced her work and household duties and still "kept her home much better than most of [the other housewives]" (Achebe, 28). In Taha Hussein's depiction of his own upbringing in An Egyptian Childhood, the sounds and smells of rural Egypt are portrayed, whereby Hussein's early education in a small village in Upper Egypt and how he comes to terms with his blindness in a society where Islamic values have a strong foothold are portrayed in the most unconventional manner. By unconventional I mean the Islamic values have not been preserved as idealistic, this is effectively done by the author exposing his humanistic shortcomings in himself towards such values that make them in turn seem more pragmatic. I believe this is the message Hussein wants to convey to societies where inhabitants are very strongly guided by a set of values as in Islamic communities; that these values are not there to deter one from their individual dreams and goals but are a set of guidelines that provide a domain in which the inhabitants of the society can reside in with harmony. Hussein's blindness helps place his shortcomings in a context that otherwise would have been seen as offensive to Islam. For instance, for his inability to eat properly at the dinner table Hussein resorted to eating in isolation; if he had not been handicapped the reader would feel reproach for Islamic values as being very stringent, especially the Western reader who would view it as an "ineluctable evil, established by custom[s] and meeting the desire of people" (Hussein, 56). However placing it in the context of Hussein's handicap and young age the reader feels sympathy wherever Hussein speaks about his schoolmaster and Arif in an "abominable fashion," or thinks his parents have wronged him by "falsehood, trickery or deception" (Hussein, 26). Having dealt with his blindness and young age in the context of Islam in such a delicate manner that has been so ...read more.

The culturally specific interpretation that could be derived from these excerpts is the rise of individualism, whereby every individual has the freedom and choice to believe, accept or reject any idea, belief and value they wish to do so, since they are no restrained by any external factors including religious constraints. This is precisely the case in Europe and the western world, where teenagers are encouraged to leave the household at a young age to pursue their own life and make their own choices. Generally speaking their parents, values and societal pressures have a minimal role in their lives since the freedom they are given surpasses these constraints and this leads to many youngsters making bad choices that lead to desperate measures as illustrated in the shocking scene that initiated the movie. On a macro-level the eternal themes of life, death, lust and love are thrown up at various points throughout the movie. Scenes where ants crawl out of a hand, a woman being sexually assaulted by a man and a serene utopian gardens help convey these eternal themes; however, there exists no framework on which to attach these emotions. Despite all this, I believe that Un Chien Andalou does not require such deep analysis, being much more a film which should be purely experienced, it achieves that which Buel and Dali aimed for which is something what nearly all great films do: to teach us more about ourselves. "Girls became girls once more and boys boys" (Achebe, 104). I wish to extend on Chinua Achebe's quote to illustrate a world where in fact girls can be girls, Arabs can be Arabs, Christians can be Christians and humans can be humans. A world where everyone's outlook broadens, globalization continues, specific cultures remain intact and respect and self-affirmation is born in each individual whereby they innately believe that the girl, Arab and Christian next door in indeed an important part of this universe. ...read more.