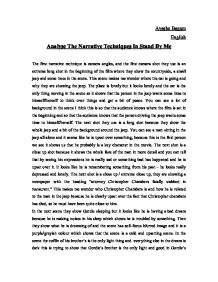 Ayesha Begum English Analyse The Narrative Techniques In Stand By Me The first narrative technique is camera angles, and the first camera shot they use is an extreme long shot in the beginning of the film where they show the countryside, a small jeep and some trees in the scene. This scene makes me wonder where the car is going and why they are showing the jeep. The place is lovely but it looks lonely and the car is the only thing moving in the scene so it shows that the person in the jeep wants some time to himself/herself to think over things and get a bit of peace. You can see a lot of background in the scene I think this is so that the audience knows where the film is set in the beginning and so that the audience knows that the person driving the jeep wants some time to himself/herself. The next shot they use is a long shot because they show the whole jeep and a bit of the background around the jeep. You can see a man sitting in the jeep all alone and it seems like he is upset over something, because this is the first person we see it shows us that he probably is a key character in the movie. ...read more.

Flashback and voice over are the next narrative techniques used in this film an example of this is when Gordie goes into his brother's room and he remembers his brother giving him a Yankees cap and also giving him a hug this is shown as a flashback, the flashback is sepia - toned which shows the memory is warm and loving and the way they show it, it looks like Gordie's brother was the only one that loved him or showed that he loved him in that house. The next narrative technique is dramatisation, in this scene Gordie tells his friends a story about an overweight boy and how he got his revenge on the people that used to laugh at his weight. There is slight comedy in this, so that the audience don't feel unhappy or depressed, so it has comedy relief in it. The revenge in the movie makes the audience quite happy because we have a sense of moral justice which makes us want Davey to have his revenge on the people that laughed at him but we don't want him to do anything that does permanent damage - because that would make us feel bad for the other people - but what Davey does makes us feel good that he had his revenge and he didn't do any permanent damage. ...read more.

group because your friends can stick up for you and be there for you when you're upset or when you want to talk to someone but if you are alone then you have no one to stick up for you and you are weak and you wouldn't have emotional support. The next song is "Lollipop" and the lyrics that keep coming up ids "lollipop", I think this song is trying to show that the boy are quite na�ve and sweet and even though in the beginning they showed them as quite bad because they were smoking now the audience should like the boys because they are actually quite sweet and innocent. The next song is "great balls of fire" and the lyrics are "you shake my nerve and rattle my brain", "come on baby you drive me crazy" this song is louder that the other songs and it talks about women but not in a pleasant way. This song is sung by Jerry Lee Lewis who isn't a very nice man and if the song isn't sung by a nice man then the song he sings isn't very nice and whoever the sing is being played for are obviously not very nice and in this case the song is being sung for the older gang who obviously aren't very nice. ...read more.

This is a very good analysis of a production and shows an excellent knowledge of techniques used by production teams and directors when developing a film.
There is specific reference to music, colour, camera angles and flashbacks and the essay covers a wide range of points in depth.