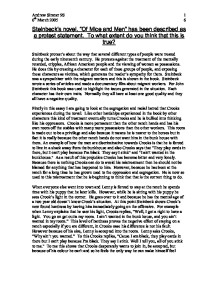 Steinbeck's novel, &quot;Of Mice and Men&quot; has been described as a protest statement

Steinbeck's novel, "Of Mice and Men" has been described as a protest statement. To what extent do you think that this is true? Steinbeck protest's about the way that several different types of people were treated during the early nineteenth century. He protests against the treatment of the mentally retarded, cripples, African American people and the viewing of women as possessions. He does this by creating a character for each of these groups of people, and exposing these characters as victims, which generates the reader's sympathy for them. Steinbeck was a sympathizer with the migrant workers and this is shown in the book. Steinbeck wrote a series of articles and made a documentary film about migrant workers. For John Steinbeck this book was used to highlight the issues generated in the situation. Each character has their own traits. Normally they all have at least one good quality and they all have a negative quality. Firstly in this essay I am going to look at the segregation and racial hatred that Crooks experiences during the novel. Like other hardships experienced in the book by other characters this kind of treatment eventually turns Crooks and he is bullied into thinking like his oppressors. Crooks is more permanent than the other ranch hands and has his own room off the stables with many more possessions than the other workers. This room is made out to be a privilege and also because it means he is nearer to the horses but in fact it is really because the other ranch hands do not want him in the bunk house with them. An example of how the men are discriminative towards Crooks is that he is forced to live in a shack away from the bunkhouse and also Crooks says that "They play cards in there, but I can't play because I'm black. They say I stink" and "I ain't wanted in the bunkhouse." ...read more.

When Candy's dog dies he searches for new friends and he starts to take an interest in George and Lenny. George and Lenny's relationship is similar to Candy's relationship which he had with the dog. George is the master, obviously superior yet sometimes powerless over his loyal dog, Lenny. When Candy discovers the 'dream farm' he wants to place his trust in George and Lenny. He offers them his life savings, the payoff he received for his hand and his monthly wages. In this gesture he was not only handing over his life savings, he was also handing over his life. Candy is one of the first people George and Lenny met when they arrived at the ranch and therefore they have some trust in him. Because Candy has been at the ranch for a long time he will have seen people come and go, and all of them will have had their 'dream farm'. But George and Lenny are the first people that Candy wishes to trust and commit his life to. I think that this is maybe because the relationships between George and Lenny, and Candy and his dog are so similar. Steinbeck is trying to tell the readers of this book that you cannot live your dreams unless you face reality first. George learnt a lot from Lenny, later in the book when it is time for Lenny to die, George does not let Curley shoot his best friend. Instead he shoots Lenny himself, because Candy said that he'd wished that he hadn't let someone else shoot his dog, he would have preferred to shoot it himself to provide himself with closure. At this point in the essay I have covered racial hatred and discriminations against the elderly and the physically disabled. It is at this point in my essay however that I wish to change the focus of the essay to Curley's wife. ...read more.

George would have never forgiven himself if he just watched Curley kill Lenny. Instead, he took Candy's advice when Candy told him how he would have liked to shoot his best friend instead of having Carlson shoot him. George was obviously thinking of what was best for Lenny when he shot him. Steinbeck's final message in his book, "Of Mice and Men," was that it is better to die surrounded by your friends thinking of all the good in your life than to die with your enemies thinking of everything you've done wrong. In conclusion, I believe that John Steinbeck's novel, "Of Mice and Men," is a protest statement because it touches upon many key life issues and addresses one or more of the parties involved in these issues. The racial hatred that Steinbeck addressed would be felt by many African Americans throughout America, and they would realise that it was wrong and they should not live with it. The women who feel owned by men who read this book would probably realise that they should live up to their dreams rather than having their place in the home. The cripples and elderly who read this book must have felt sorry at the fact that they were being bullied into making a hard decision that they did not want to make and the mentally retarded people that can read this book might be interested to know that it is not their fault. However Lenny's character affects more than just the real Lenny's in the world. It sends a message to others, people who have to live with mentally retarded people every day, it tells them to understand what they are going through and to take care as Lenny like characters may not fully understand what they mean. This book can be summed up as a statement, perhaps even as a leaflet to inform people of the hardships of the nineteenth century America. ?? ?? ?? ?? Andrew Simner 9S 1 6th March 2005 6 ...read more.