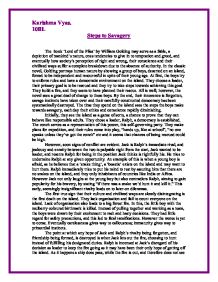 Karishma Vyas. 10BL Steps to Savagery The book 'Lord of the Flies' by William Golding may serve as a fable, a depiction of mankind's nature, ones tendencies to give in to temptation and greed, and eventually how society's perception of right and wrong, their conscience and their civilized ways suffer a complete breakdown due to the absence of authority. In the classic novel, Golding portrays human nature by showing a group of boys, deserted on an island, forced to be independent and resourceful in spite of their young age. At first, the boys try to enforce rules and have a democratic environment on the island. They choose a leader, their primary goal is to be rescued and they try to take steps towards achieving this goal. They build a fire, and they seem to have planned their rescue. All is well; however, the novel sees a great deal of change to these boys. By the end, their innocence is forgotten, savage instincts have taken over and their carefully constructed democracy has been systematically destroyed. The time they spend on the island sees the steps the boys make towards savagery, each day their ethics and conscience rapidly diminishing. Initially, they see the island as a game of sorts, a chance to prove that they can behave like responsible adults. ...read more.

His conscience hasn't been completely destroyed, as he purposely "aimed, threw it at Henry, threw it to miss". However he wanted to harm the littlun, for no apparent reason. The reason behind him doing this was simply the fact that he could and therefore would. Their gradual descent into savagery is partially due to Ralph's inability to lead as the novel progresses. As Jack's power increases, because of the appeal of hunting, Ralph's power diminishes, because he represents and instigates law and order. He is insecure, because he fears that if it comes to a showdown between him and Jack, the majority of support would be on Jack's side. Another factor that contributed towards Ralph's growing weaknesses was the fact that he felt homesick. He often drifts into daydreams about his home, and the things he misses most. He yearns for the ponies, the snow; he remembers looking out of the window past a copper kettle and a plate with little blue men on it. He misses his parents, his bedroom with his books, the bowl of cornflakes with sugar and cream before bed and all the little things that were his home. At this point they could not be further away from home, and this homesickness weakens Ralph. ...read more.

This is an accurate representation of the destruction of democracy, law and order, clear thought and intelligence and the boys' civilized ways. In spite of the severity of what Roger has just done, the boys don't seem to care. Ralph is the only one who appears to feel true remorse. After this, Samneric are captured and forced to join Jack's side, leaving Ralph utterly alone. The final leap into Savagery is in the last chapter, in which the transfer from boy into savage, Christian into Satanist is complete. Ralph is Jack's one true rival, and has been from the start. Now, Jack uses his newly-found popularity and support to eliminate his enemy. His tribe plan to hunt and kill Ralph. As if this isn't brutal enough, the plans for Ralph are truly savage. Roger sharpens a stick at both ends. This is an indication that after they kill him, they are going to offer his head to the Beast. This final act is the ultimate in savagery, and shows that the boys have truly become primitive, and have a taste for murder, for blood, and for death. This is also evident in the way that their chant (originally "Kill the pig! Slit her throat! Spill her blood!" and now "Kill the beast! Slit his throat! Bash him in! Spill his blood!") has changed. It has become increasingly violent and brutal. The end of the novel shows the boys have changed, perhaps irreversibly, for the worse. ...read more.