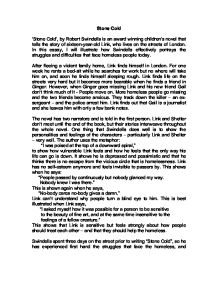 Stone Cold 'Stone Cold', by Robert Swindells is an award winning children's novel that tells the story of sixteen-year-old Link, who lives on the streets of London. In this essay, I will illustrate how Swindells effectively portrays the struggles and difficulties that face homeless people today. After fleeing a violent family home, Link finds himself in London. For one week he rents a bed-sit while he searches for work but no where will take him on, and soon he finds himself sleeping rough. Link finds life on the streets very hard but it becomes more bearable when he finds a friend in Ginger. However, when Ginger goes missing Link and his new friend Gail don't think much of it - People move on. More homeless people go missing and the two friends become anxious. They track down the killer - an ex-sergeant - and the police arrest him. Link finds out that Gail is a journalist and she leaves him with only a few bank notes. ...read more.

One problem is that they are vulnerable. On Link's first night sleeping rough, a "streetwise tough" steals his spot. "When I got back to my doorway somebody was there. I didn't see him 'til I kicked his foot. He leapt up. A six footer - as wide as the door." Then he steals Link's spot. Later in the novel, Link talks about other things that could happen. Homeless people are likely to be alone, and could be targeted by anyone. Link says: "You might be spotted by a gang of lager louts on the look-out for someone to maim. That happens all the time too, and if they get carried away you can end up dead." This demonstrates how homeless people are vulnerable in many ways, particularly by those who are looking for trouble, and who don't see them as any value. Link says "you can end up dead", as though it is nothing out of the ordinary - an acceptable thing to happen, as though homeless people are worthless. ...read more.

The last main problem that people living on the streets face is hunger, and in stone cold I think Swindells shows best how hungry you can be when Link says: "The cold seems to settle in your bones when there's nothing in your stomach. You can't shift it." This shows that when you're hungry, it makes the cold even worse and there's no getting rid of it. Not eating properly also leads to you being underweight. Link says: "You're going to wake up with bruises on hips, shoulders, elbows, ankles and knees - especially if you're a bit thin from not eating properly." So, hunger makes other problems worse. If you are hungry, you are colder and more uncomfortable, which makes it harder to sleep, which makes you more tired. 'Stone cold' is an evocative novel that makes the reader see homeless people in a different light. Robert Swindells effectively shows what homeless people go through every day, by showing the problems Link faces throughout the book, and how he suffers. This is what makes 'Stone Cold' a good book. ...read more.

*** 3 Stars
This is a very well written essay which explores the main problems that those sleeping rough have to face.
The quotes are well selected throughout and support comments made by using PEE effectively. In places the language used in the quotes needs to be analysed more effectively.
Brief but effective summary.