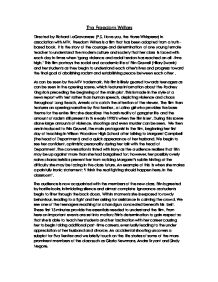 Stopping By Woods on A Snowy Evening Creative Response

The Freedom Writers Directed by Richard LaGravanese (P.S. I love you, the Horse Whisperer) in association with MTV, Freedom Writers is a film that has been adapted from a truth-based book. It is the story of the courage and determination of one young female teacher to understand the modern culture and society that her class is faced with each day in times when 'gang violence and racial tension has reached an all-time high.' This film portrays the social and academic life of Erin Gruwell (Hilary Swank) and her students as they begin to understand each other's lives and progress toward the final goal of abolishing racism and establishing peace between each other. As can be seen by the MTV trademark, this film is likely geared towards teenagers as can be seen in the opening scene, which features information about the Rodney King riots preceding the beginning of the main plot. This is made in the style of a news report with text rather than human speech, depicting violence and chaos throughout Long Beach, America to catch the attention of the viewer. The film then features an opening narrative by Eva Benitez, a Latino girl who provides the base theme for the entire film; she describes the harsh reality of gangster life and the amount of racism still present in the early 1990's when the film is set. ...read more.

Freedom writers accurately conveys the sad reality of people at such a relatively young age being thrust into a cruel world where they learn to trust nobody and death has become a normal and quite frequently occurring part of their lives. One of the most evident strong points of this film is the character development throughout the story and the ironic effect that has on Erin's personal life. She develops a strong fondness of 'her kids' after a conversation comparing the Holocaust with the persecution of other races in modern times and the realisation that they have never heard of it, yet have all been exposed to something of similar nature (excepting the single white student). This leads to a higher level of appreciation and respect for the teacher and students begin changing their attitudes towards her. She soon hands out diaries for them in which they can write anything they want and can leave them for her to read if they so desire. Much to her surprise, they all leave their journals for her and through these she increases her knowledge of their culture and living standards. Both the teacher and students bond further in multiple ways portrayed in the film; she hands out a book on gang life to engage them in reading and then a more complex text, the Diary of Anne Frank which leave the teenagers engrossed. ...read more.

Dark places such as the classroom at night or the frequent contrast of white writing on a black background creates a dim, bleak atmosphere and a sense of mystery that engages the viewer. Transitions such as fade ins and superimposed objects such as candles in the background create a supernatural feel; because the film is largely produced in such a realistic manner, a scene such as this is a different style and therefore arouses the viewers interest. The use of first-person voiceovers during the film also helps the audience to relate with the characters and more easily understand the way they act in the mostly third-person scenes such as those with Eva Benitez. Although there are some plot holes in this film such as the sudden plot element of Erin's pearls being forgotten and an occasional sense of badly made scenes such as the opening 'news scene', Freedom Writers has achieved capturing the essence of the book it was based on. The accurately depicted lives of the students as well as a sense of realism through good acting, fitting music and camerawork, voiceovers, realistic speech and situations, drama and the portrayal of recurring conflict between different races, the students and the teacher and of course Erin and her husband have all contributed towards a fairly well-made, engaging and thought-provoking film. ?? ?? ?? ?? ...read more.