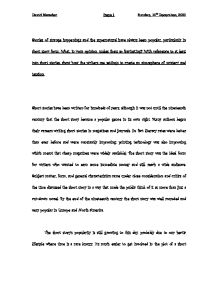 Stories of strange happenings and the supernatural have always been popular, particularly in short story form. What, in your opinion, makes them so fascinating?

Stories of strange happenings and the supernatural have always been popular, particularly in short story form. What, in your opinion, makes them so fascinating? With reference to at least two short stories, show how the writers use settings to create an atmosphere of mystery and tension. Short stories have been written for hundreds of years, although it was not until the nineteenth century that the short story became a popular genre in its own right. Many authors began their careers writing short stories in magazines and journals. (In fact literacy rates were better than ever before and were constantly improving; printing technology was also improving which meant that cheap magazines were widely available). The short story was the ideal form for writers who wanted to earn some immediate money and still reach a wide audience. Subject matter, form, and general characteristics came under close consideration and critics of the time discussed the short story in a way that made the public think of it as more than just a cut-down novel. ...read more.

H.G. Wells chose to set the story there, and he has obviously done it for a reason. "The door to the red room and the steps up to it were in a shadowy corner," this implies that the room has a sinister background, and may make the young man apprehensive or even fearful, it will also have the same effect on the reader. It is typical of its time, and the language demonstrates this. "There's many things to see, when one's still but eight and twenty", this was said by the old woman in the second paragraph, and it's an excellent example of Victorian language. The sentence structure and vocabulary is adversely different to that of the present day. This affects way the author writes a great deal, as society and culture at the time influence him and his writing a great deal. Like many other gothic short stories, the plot is centered on the unexplained and the story often questions the reader about this. ...read more.

"He noticed that she had small, white, quickly moving hands, and red fingernails." Again Billy Weaver said this, and it may make the reader feel oppressed or suspicious of the landlady. Writers will always be influenced by the society and culture of their particular era. This changes dramatically over time and therefore it effects writers in very different ways. This may be in the language or even the style the author uses. Both these stories are well written, although both are in slightly different styles. Personally I prefer that of Roald Dahl in the Landlady because the writer builds up suspense more effectively, and with less effort. The language is also more suited to the modern reader, compared to the Victorian language of the Red Room which some people may find difficult to understand. There is no doubt that the pre-nineteenth century gothic short story is still popular, as many are still read to this day. Although it's post-nineteenth century counterpart seems to me, to be the better choice for today's readers. ?? ?? ?? ?? 1 Page 1 David Marsden Sunday, 10th December, 2000 ...read more.