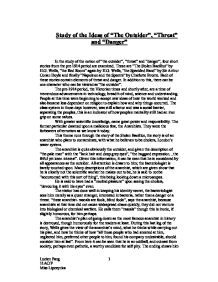 Study of the Ideas of

Study of the Ideas of "The Outsider", "Threat" and "Danger" In the study of the notion of "the outsider", "threat" and "danger", four short stories from the pre 1914 period are examined. These are "The Stolen Bacillus" by H.G. Wells, "the Red Room" again by H.G. Wells, "the Speckled Band" by Sir Arthur Conan Doyle and finally "Napoleon and the Spectre" by Charlotte Bronte. Each of these stories contain elements of threat and danger. In addition to this, there can be one character who can be viewed as "the outsider". The pre-1914 period, the Victorian times and shortly after, are a time of tremendous advancements in technology, breadth of mind, science and understanding. People at this time were beginning to accept new ideas of how the world worked and also became less dependant on religion to explain how and why things occurred. The class system in those days however, was still a factor and was a social barrier, separating the peoples, this is an indicator of how peoples mentality still had an iron grip on some values. With greater scientific knowledge, came great power and responsibility. The former particular dawned upon a malicious few, the Anarchists. They were the forbearers of terrorism as we know it today. This theme runs through the story of the Stolen Bacillus, the story is of an anarchist who plans to contaminate, with what he believes to be cholera, London's water system. ...read more.

The ending of the story is important, as the storyline on theme has developed. At first it is seemingly ordinary, but with the thievery of the test tube, and the horse carriage chase, the storyline changes into an extraordinary one. Suddenly, with the realisation of the folly of the anarchist, everything is back to normal, for the bacteriologist anyway. The anarchist is promptly forgotten. Whilst The Stolen Bacillus gives an account of an almost unknown character defying society, Napoleon and the Spectre is told from the point of view of the great military leader. This contrasts starkly with the former, as now, the person with the high social standing is the outsider. Within this story, Napoleon is exhibited as an ordinary person, with ordinary dreads, insecure and fearful. Beginning the story, Napoleon gives an order to his servant, 'Let down those windows-curtains, and shut the casement before you leave the room', this shows how he is expected to be obeyed when he gives an order, he gives short and curt commands, and obviously makes full use of his station. He says 'Pooh! It was merely an ocular delusion', convincing himself that it was nothing, but his imagination, though even this, he does not wish to admit to, not even to himself. Bronte conveys a mood of uncertainty to the reader. The spectre uses commands such as 'Forward' and 'Silence'. ...read more.

Once inside the Red Room, the reader, indeed, the young man finds out about what the house is about. The man soaks up the atmosphere, and judges whether the stories really could be true, or just unfounded myths. Now the stories seem more real, the young man feeling slightly scared, even thinking that "One could well understand the legends that had sprouted in its black corners" As the young man spends more time within the Red Room, he gets more and more scared. He then starts to talk to himself, frantically. Wells calls it "half hysterical". Suddenly, after much scrambling and movement, the young man is knocked unconscious. When the young man wakes up, he realises what happened, and is now much less confident, and not as sure of himself, especially when talking to the housekeepers and when of talking of the Red Room. This story looks at how there is danger and the feeling of a threat of fear. The story, Napoleon and the Spectre, shows how Napoleon, is scared of what he does not know. He blames the hallucinations on his imagination, but in reality, he does not understand them, and is scared, and he looks for something to blame. The Red Room illustrates the feeling of unknowing being the cause of fear. People in general are scared of what they do not understand; the sum of all fears is in mis-understanding. 1 Lucien Pang 11AC/P Miss Lipczynka ...read more.