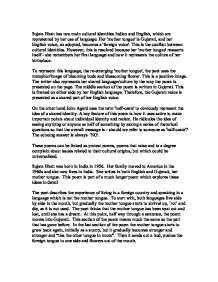 Sujata Bhatt has two main culturalidentities Indian and English, which are represented by her use of language.Her 'mother tongue' is Gujerati, and her English voice, an adopted, becomes a'foreign voice'. This is the conflict between cultural identit...

Sujata Bhatt has two main cultural identities Indian and English, which are represented by her use of language. Her 'mother tongue' is Gujerati, and her English voice, an adopted, becomes a 'foreign voice'. This is the conflict between cultural identities. However, this is resolved because her 'mother tongue' reasserts itself - she remembers her first language and how it represents the culture of her birthplace. To represent this language, the re-emerging 'mother tongue', the poet uses the metaphor/image of blooming buds and blossoming flower. This is a positive image. The writer also represents her shared language/culture by the way the poem is presented on the page. The middle section of the poem is written in Gujerati. This is framed on either side by her English language. Therefore, the Gujerati voice is presented as a shared part of her English voice. On the other hand John Agard uses the term 'half-caste' to obviously represent the idea of a shared identity. A key feature of this poem is how it uses satire to make important points about individual identity and racism. He ridicules the idea of seeing anything or anyone as half of something by asking a series of rhetorical questions so that the overall message is - should we refer to someone as 'half-caste'? ...read more.

However, in the final section of the poem it sends out a "shoot", becomes "longer", "moist" and "grows strong veins". Then as it grows in strength it becomes dominant and "ties the other tongue in knots" and "pushes the other tongue aside". The mother tongue is like a plant in that it has roots deep inside the person and will always shoot again, even if it is cut right down and appears to be dead. It can be dormant, but will never really die. The central section of the poem is written in Gujerati, Sujata Bhatt's mother tongue. This section, which means much the same as lines 15-16 and 31-38, divides the poem at the point where the poet is just starting to dream about the tongue growing back. The Gujerati section comes in half way through a sentence, indicating the strength of the mother tongue, which can interrupt a thought or a dream in the foreign language. This is exactly what the metaphorical tongue does in the last section of the poem, it takes over from the foreign tongue and pushes it out of the way. ...read more.

Also, they often suffer hostility from the racial or ethnic communities of both parents. Though the poem is light-hearted in tone, the argument of the last six lines is very serious, and has a universal application: we need to give people our full attention and respect, if we are to deserve to hear their whole "story". The form of the poem is related to its subject, as Agard uses non-standard English, in the form of Afro-Caribbean patois. This shows how he stands outside mainstream British culture. There is no formal rhyme scheme or metre, but the poem contains rhymes ("wha yu mean...mix red an green"). A formal device which Agard favours is repetition: "Explain yuself/wha yu mean", for example. The poem is colloquial, written as if spoken to someone with imperatives (commands) like "Explain yuself" and questions like "wha yu mean". The punctuation is non-standard using the hyphen (-) and slash (/) but no comma nor full stop, not even at the end. The spelling uses both standard and non-standard forms - the latter to show pronunciation. The patois is most marked in its grammar, where verbs are missed out ("Ah listening" for "I am listening" or "I half-caste human being" for "I am half-caste"). ...read more.