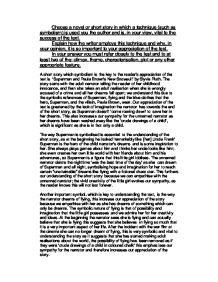 Choose a novel or short story in which a technique (such as symbolism) is used you the author and is, in your view, vital to the success of the text. Explain how the writer employs this technique and why, in your opinion, it is so important to your appreciation of the text. In your answer you must refer closely to the test and to at least two of the: climax, theme, characterisation, plot or any other appropriate feature. A short story which symbolism is the key to the reader's appreciation of the text is 'Superman and Paula Brown's New Snowsuit' by Slyvia Plath. The story starts with the adult narrator telling the reader of her childhood innocence, and then she takes an adult realisation when she is wrongly accused of a crime and all her dreams fall apart; we understand this due to the symbolic references of Superman, flying and the blue clothes that the hero, Superman, and the villain, Paula Brown, wear. ...read more.

The unnamed narrator claims the nighttime 'was the best time of the day' as she can dream of Superman and all night, symbolising hope and imagination for her to reach certain "unattainable" dreams like flying with a fictional character. This furthers our understanding of the short story because we can empathise with the unnamed narrator; the vivid creativity of the little girl evokes our sympathy, as the reader knows this will not last forever. Another important symbol, which is key to understanding the text, is the way the narrator dreams of flying, this increase our appreciation of the story because we empathise with her as she has dreams of something which can only be dreams. The symbolic nature of flying is that of possibility and imagination that the little girl possesses and we admire her for her creativity and ideas. At the beginning the narrator sees she is flying and can actually believe that she is flying this suggests that she believes in flying so much that it is a very important aspect of her life. ...read more.

He is supposed to come and 'smash the yellow men' but sadly since being let down by her family and her friends she no longer sees Superman in her dreams. This evokes our appreciation for the narrator as we can emphasise with her because she had made adult realisations that the world is cruel and unjust. To conclude it is one of Plath's writing that she often uses symbolism to reinforce the theme of childhood innocence being taken away and the way the narrator make adult realisations. This creates a sense of sympathising with the unnamed narrator to generate our appreciation of the short story. The symbols individually may not seem quite significant but when considered together they become vital to understanding the story as they highlight important themes of materialistic, justice and childhood innocence. Through the use of symbolism Plath reminds us that adult realisation is unavoidable evoking our sympathy for the little girl therefore also increasing our appreciation for the unnamed character. ...read more.