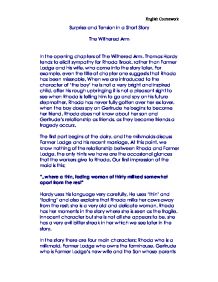 Surprise and Tension In A Short Story - The Withered Arm

Surprise and Tension in a Short Story The Withered Arm In the opening chapters of The Withered Arm, Thomas Hardy tends to elicit sympathy for Rhoda Brook, rather than Farmer Lodge and his wife, who come into the story later. For example, even the title of chapter one suggests that Rhoda has been miserable. When we are introduced to the character of 'the boy' he is not a very bright and inspired child, after his rough upbringing it is not a pleasant sight to see when Rhoda is telling him to go and spy on his future stepmother. Rhoda has never fully gotten over her ex lover, when the boy does spy on Gertrude he begins to become her friend. Rhoda does not know about her son and Gertrude's relationship as friends, as they become friends a tragedy occurs. The first part begins at the dairy, and the milkmaids discuss Farmer Lodge and his recent marriage. At this point, we know nothing of the relationship between Rhoda and Farmer Lodge, the only hints we have are the occasional glances that the workers give to Rhoda. Our first impression of the maid is this: "..where a thin, fading woman of thirty milked somewhat apart from the rest" Hardy uses his language very carefully. He uses 'thin' and 'fading' and also explains that Rhoda milks her cows away from the rest; she is a very old and delicate woman. ...read more.

Rhoda feels guilty when we do not even know whether she was the cause of the problem. "I'll come and bring you some better boots, and see your mother." "It was built of mud walls, the surface of which had been washed by many rains into channels and depressions..." In a way, the house is a reflection of Rhoda herself. His treatment of her conjures up an impression about his personality, although Hardy does not directly state what Lodge has done, he is subtler. Hardy shows in The Withered Arm there are incompatibilities between Farmer Lodge and Gertrude by telling us that they don't spend a lot of time with each other etc. She is more concerned with her arm than she is with her husband. This proves that the marriage in the 19th Century was quite meaningless; it was just a way of the male partner getting a son to carry on the family business and family name. As well, as it being a way to make the male partner more successful in his life and his career. Except, because of Gertrude's obsession they never manage to have a child of their own, for Gertrude is so wrapped up in her world that consists of healing the poor withered arm. Mr. Lodge discovers that his wife has now become obsessive over healing her arm, when he discovered that his wife's arm is disfigured he begins to stop loving her and their relationship begins to have cracks in it. ...read more.

Conclusion The Withered Arm is a well crafted short story, written in the prose format and is a famous book. Thomas Hardy has written with strong passion and depicted great characters with outstanding surprise and tension throughout the entire story. Although limited in the number of characters Hardy's third person narrative provides great effect and brings each of the characters alive. Hardy brings each character 'alive' in a specific way, for example when we are first introduced to Rhoda Brook. Hardy describes her as a very poor, lonely old woman, and her outcast life is described in such a way that it evokes emotions from the reader. The Withered Arm also highlights the differentiation between social classes. This proves one of the many reasons why Rhoda is the creepy, lost character that you feel sorry for. Hardy develops a lot of emotion from the story through the character of Rhoda. Rhoda Brook is a dark milkmaid who becomes obsessive over her lovers beautiful new wife, after her lover abandons her and their illegitimate son. Mr. Lodge is upper class and Rhoda is lower class. There is a very big connection her as to why Mr. Lodge left Rhoda and their son. He disowned his son because Lodge was having an affair with Rhoda at the time; he began to get bored of her. Rhoda is of a lower social class than he is so he doesn't want people to know he was involved with her. ?? ?? ?? ?? English Coursework ...read more.