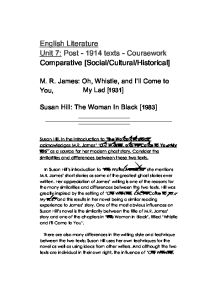 Susan Hill, in the introduction to 'The Woman In Black' acknowledges M.R. James' 'Oh, Whistle, and I'll Come to You, My Lad' as a source for her modern ghost story. Consider the similarities and differences between these two texts.

Also both characters are haunted by their experiences, Arthur specifically cannot escape the memories of the ghost and the death of his family. There is however, a contrast in the reason for the main character's visit to the setting described at the beginning of the story. Parkins is on a leisure trip, in particular to 'improve [his] game' (golf), whereas Arthur is working, sorting out paperwork for a deceased woman named Mrs. Drablow. Another aspect common to both stories is country and folklore, in 'Oh, Whistle, and I'll Come to You, My Lad' there are superstitions believed by locals but doubted by outsiders especially the main character. An example of this is when the frightened boy runs into the Colonel, and tells of something strange he had seen. Parkins "was in favour of sending the boy home" while the Colonel 'wanted to get to the bottom of it," showing that the locals were more inclined to believe in the supernatural than the outsider. Similar situations are present in 'The Woman In Black' with Arthur being the doubter of the country lore; when people in Crythin Gifford begin to believe the sightings of the woman in black are connected to the deaths of children in the area, Arthur just dismisses them as rumours and superstition, "Come", I said smiling, "you're not going to start telling me strange tales of lonely houses?" ...read more.

The ghost is passive, with 'formidable quickness' and only shows a very short period of aggression, causing no significant damage. However, the ghost in Susan Hill's novel is altogether different, it is more human, more palpable and a lot more active. The ghost is significantly more aggressive and holds a notably more evil, violent and revengeful nature leaving death and destruction in its wake, most notably at the end of the story when it causes, 'dreadful confusion' by making the horse drawing the carriage with Arthur, Stella and their baby son, rear up and run 'crazily' off the road, resulting ultimately of the death of not only his son but also Arthur's wife. The regularity of the ghosts' appearances also differs between the two stories. In 'Oh, Whistle, and I'll Come to You, My Lad' the ghost appears only once at the end whereas the ghost in 'Woman In Black' appears many times throughout the text, sometimes passively and sometimes aggressively. M. R. James' 'Oh, Whistle, and I'll Come to You, My Lad' and Susan Hill's 'Woman In Black' share a lot of the same qualities, due to the large amount of influence Hill took from the James short story. The main characters have a lot in common and the setting of the two stories is very similar. Conversely, there are lot of differences between the two; M.R James chose to have a passive spectre while Susan Hill's story contains a vengeful, dangerous ghost. On the whole, they are two very effective ghost stories that employ several writing techniques to add effectiveness to the plot. ...read more.