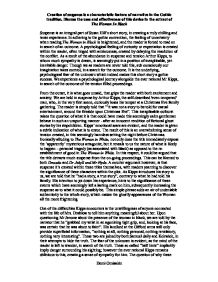 Suspense is an integral part of Susan Hill's short story, in creating a truly chilling and tense experience. In adhering to the gothic convention, the feeling of uncertainty when reading The Woman in Black is heightened, and the reader is forced to read on in search of an outcome. A psychological feeling of curiosity or expectation is created within the reader, often tinged with anxiousness, created by delaying the resolution of the conflict. As a result of the abundance in suspense and tension Arthur Kipps, to whom much sympathy is drawn, is seemingly put in a position of inexplicable, yet inevitable danger. Though we as readers are never told this, sub consciously our imagination takes control, in a search for the outcome. It is the underlying, psychological fear of the unknown which indeed makes this short story a gothic success. We experience a psychological journey alongside the ever rational Mr Kipps, in search of the outcome of the tension filled proceedings. From the outset, it is what goes unsaid, that grips the reader with both excitement and anxiety. ...read more.

Drablow to tell him anything meaningful about her. Upon questioning Mr Jerome about the presence of the woman in black, we are told by the narrator that he "grabbed my wrist in an agonizing tight grip, and, looking at his face, was certain that he was about to faint". His landlord at the Gifford arms will only provide superficial information, "nothing at all, nothing personal, nothing revelatory, nothing very interesting". These two are joined by both Samuel daily and Kckwick, in their attempts to hide the truth. The fear of the unknown is evident, as the mind of the reader is left to wander, in search of the truth. These so called "half hints" implicitly imply danger surrounding his sighting; however the ever rational Kipps remains oblivious to this, creating a sense of sympathy for him. The question of why these inhabitants of Crythin Gifforder remain tight-lipped also burns within the thoughts of the reader, creating a considerable deal of tension, as the reader reads on excitedly in search of answers. The major turning point within the short story is in the chapter titled In the Nursery. ...read more.

This is very similar to the case of the apparent drowning of the horse and child in the marshes. Before the reader is provided with an explanation, we are at odds as to what has infact occurred, particularly after the safe arrival of Keckwick a little while later. The form also emphasises the significance of suspense. The significant range of sentence types and choices of vocabulary effectively decide the pace at different points in this chapter. During the opening, there are advanced and long sentences and a wide range of vocabulary in order to detail the events. The effect of this however, is increased tension and suspense as a result of the slow pace, as the reader is left waiting in expectation for the previously foreshadowed climax of the chapter. The sentence structures change accordingly as we near the conclusion of the chapter. The result is a sense of surprise, the reader experiencing the shock and horror, comparable to the emotions present, whilst reading The Murder Case of John Carew. ?? ?? ?? ?? Creation of suspense is a characteristic feature of narrative in the Gothic tradition. Discuss the uses and effectiveness of this device in the extract of The Woman In Black Demi Omisakin ...read more.