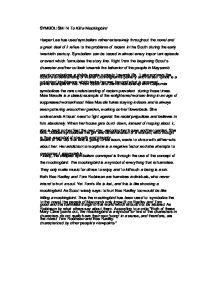 SYMBOLISM IN To Kill a Mockingbird

SYMBOLISM IN To Kill a Mockingbird Harper Lee has used symbolism rather extensively throughout the novel and a great deal of it refers to the problems of racism in the South during the early twentieth century. Symbolism can be traced in almost every important episode or event which formulates the story line. Right from the beginning Scout's character and her outlook towards the behavior of the people in Maycomb county symbolizes a child's innate curiosity towards life. It also portrays the untainted intelligence which helps her see beyond what is apparent. Scout's understanding of Walter Cunningham's poverty and his self-pride is a prime example of this. Even Scout and Jem's relationship with Calpurnia symbolizes the rare understanding of racism prevalent during those times. Miss Maudie is a classic example of the enlightened woman living in an age of suppressed womanhood. Miss Maudie hates staying indoors and is always seen pottering around her garden, working on her flowerbeds. She understands Atticus' need to fight against the racial prejudices and believes in him absolutely. ...read more.

As Mary Clare points out, the mockingbird is a symbol for two of the characters in the novel: Tom Robinson and Boo Radley. In the novel, the people of Maycomb only know Boo Radley and Tom Robinson by what others say about them. According to a critic "Both of these characters do not really have their own 'song' in a sense, and therefore, are characterized by other people's viewpoints." MORALITY IN THE NOVEL Harper Lee, through her novel has attempted to present certain moral truths to the reader: the underlying morality of the Maycomb county has been well portrayed. The primary moral truth that is evident in the book is the prominence given to life and the need to safeguard it. This does not only concern the trial scene where a black man's life is at stake, but various other instances too. Atticus values life fundamentally, even if it is that of a bird's. He refuses to touch a gun, unless it is absolutely essential. ...read more.

These values and morals have one unifying message -- man needs the society he lives in. All men are equal and it is pointless to make distinctions. Only by living together in deliberate tolerance and love can one make the best of life. Though the tone throughout is somber and interspersed with serious thoughts, yet Harper Lee has injected humor in novel. She has made a subtle use of humor, so that the reader can comprehend the serious messages with the agreeable flavor of humor. Scout's childish viewing of the entire scenario touches the reader's heart and brings a smile to the face, while going though the entire gamut of experiences that childhood is all about. Thus she very effectively blends entertainment with serious morality. The lesson of equality is also imparted very effectively. It is well brought out that man has needlessly differentiated between the color of complexion of people and so formed barriers of prejudice. Harper has taken pains to convey the message that one must learn to be tolerant towards others. Only then can a better understanding and a stronger bond of mankind be formed. ...read more.