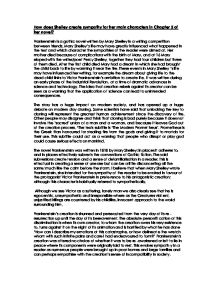 Sympathy in Chapter 5 of Frankenstien

How does Shelley create sympathy for her main characters in Chapter 5 of her novel? Frankenstein is a gothic novel written by Mary Shelley in a writing competition between friends. Mary Shelley's life may have greatly influenced what happened in the text and which character the sympathies of the reader were aimed at. Her mother died because of complications with the birth of Mary, and at 16 Mary eloped with the writer/poet Percy Shelley, together they had four children but three of them died. After the first child died Mary had a dream in which she had brought the child back to life by warming it near the fire. These events in Mary Shelley's life may have influenced her writing, for example the dream about giving life to the dead child links to Victor Frankenstein's ambition to create life. It was written during an early phase of the Industrial Revolution, at a time of dramatic advances in science and technology. The idea that creation rebels against its creator can be seen as a warning that the application of science can lead to unintended consequences. The story has a huge impact on modern society, and has opened up a huge debate on modern day cloning. ...read more.

Shelley ultimately shows how the Monster should be pitied, rather than criticised. We first see the Monster through the eyes of Robert Walton, who describes it as being "of gigantic stature". This could arouse alarm rather than sympathy, and this alarm is reinforced when it is described in detail in chapter 5. Here, we find Victor call his creation a "catastrophe", "wretch" and "miserable monster" . The Monster is hideous to look at and Victor feels he must run away to escape its clutches. All of this seems to indicate that it is, in fact, a true monster, something to be feared and capable of great harm. But Shelley is only allowing us to see it from Victor's biased point of view. When we hear the Monster's story, a very different impression is created. The dehumanisation of the monster throughout chapter five enhances the reader's thoughts and reflects sympathy. The description of his 'shrivelled complexion' creates a tense atmosphere that is continued to the extent where the monster has no entirety or soul. He is the subject of a disastrous experiment and is non-ethical. The way in which Shelley explains the 'deteriorated corpse' creates great sympathy and creeps its way beneath you creating empathy. ...read more.

'Oh! No mortal could support the horror of that countenance.' Frankenstein's horror is again reflected in the dream he has on the night. In the dream, he depicts embracing Elizabeth, and suddenly, the corpse of his dead mother appears in her place. This dream reflects Frankenstein's partially deluded state of mind, to which he is experiencing at the time. In inference, I think that Mary Shelley intended for the sympathy of the reader to be evoked in favour of Frankenstein rather than his creation, but for the issue to be largely open-ended. I believe that when the novel was written, Frankenstein's creation would have been feared rather than disliked particularly; but in today's superficial society, it would be almost unanimously hated just for being different. However when assessing all the techniques used I feel that throughout chapter 5 the constant reference to how the Monsters freedom is undeniably and unnecessarily striped from his innocent complexion reflects great sympathy. Although when inferring and shadowing the structure of how it is written it looks as though Mary Shelley wanted you to feel great sympathy for Victor I personally believe that both characters can be argued against there lack of injustice. ?? ?? ?? ?? ...read more.