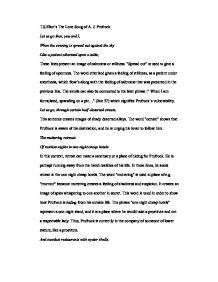 T.S.Eliot's The Love Song of A. J. Prufrock

T.S.Eliot's The Love Song of A. J. Prufrock Let us go then, you and I, When the evening is spread out against the sky Like a patient etherised upon a table; These lines present an image of calmness or stillness. "Spread out" is used to give a feeling of openness. The word etherised gives a feeling of stillness, as a patient under anesthesia, which flow's along with the feeling of calmness that was presented in the previous line. The simile can also be connected to the later phrase :" When I am formulated, sprawling on a pin..." (line 57) which signifies Prufrock's vulnerability. Let us go, through certain half-deserted streets, This sentence creates images of shady deserted alleys. The word "certain" shows that Prufrock is aware of his destination, and he is urging his lover to follow him. The muttering retreats Of restless nights in one night cheap hotels. In this context, retreat can mean a sanctuary or a place of hiding for Prufrock. He is perhaps running away from the harsh realities of his life. In these lines, he seeks retreat in the one night cheap hotels. The word "muttering" is used in place of e.g. "murmur" because muttering creates a feeling of shadiness and suspicion. It creates an image of spies whispering to one another in secret. This word is used in order to show how Prufrock is hiding from his outside life. The phrase "one night cheap hotels" represent a one-night stand, and it is a place where he would take a prostitute and not a respectable lady. ...read more.

ask the question, etc. Time for you and time for me, And time yet for a hundred indecisions, And for a hundred visions and revisions, Before the taking of toast and tea. This stanza continues the feeling of limitless time. And here he says that there is time for him to make visions of his decisions, before the "taking of toast and tea". That is, the final decision is made. However he actually does not possess this much control over time as he so confidently stated in this stanza and the previous three lines, because he later says "I grow old, I grow old...."(line 120). More Comments T.S.Eliot's presents his poem The Love Song of Alfred J.Prufrock in such a way that it captures and binds the audience's attention throughout the entire duration of the poem. First of all, he uses a variety of lengths for his stanzas. For example, the first stanza is as long as 12 lines but the second stanza is only a mere 2 lines. This avoids a sense of repetition as it is not the same length over and over and over again. Eliot also uses the technique of iambic pentameter in most of his lines. For example, Of rest/less nights/ in one/night cheap /hotels creates a rhythm rather like a drumbeat. It sets the pace for the most part of the poem, making it seem as if Prufrock is emitting a steady flow of his thoughts. This allows the reader to create an image of Prufrock as being an introvert, or a person who is more likely to think things over very carefully in his mind before saying it aloud. ...read more.

Later throughout the poem, his extreme indecisiveness can be felt strongly through his constant question of "Do I dare?" We know that these lines present an image of dirtiness, but it also shows desire. The metaphor of a fog-like cat to sex shows that it is an enjoyable and sensual experience, and that is the reason he goes to the prostitutes. This can be shown because later in the poems, as he shows his insecurities about his choices concerning women, he does so in a 'clean' and respectable environment ("toast and tea", braceleted arms, etc). This gives us the impression that part of his insecurity of his choice would be the choice between a clean life with little sensuality, or a very unclean but sensual life. It seems that he believes that the two cannot coexist. Later in the poem we see more superficiality, "After the cups, the marmalade, the tea, Among the porcelain, among some talk of you and me." But here in the beginning, he describes things as very real, and very emotional, like the sensuality truly affects him in a way that the superficiality offered by cleaner women cannot. He says "if one settling a pillow by her head Should say "That is not what I meant at all"" Now this seems to imply that what he DID mean could be sensuality in the way he had it with the prostitute, but he is afraid, that if he tries to achieve this level of sensuality with the more clean, respectable woman, they will "throw off a shawl" and tell him that that is not what they expected of him. That they did not expect him to want this level of sensuality from them. ...read more.