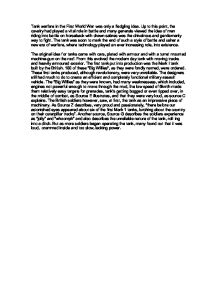 Tank warfare in the First World War was only a fledgling idea.

Tank warfare in the First World War was only a fledgling idea. Up to this point, the cavalry had played a vital role in battle and many generals viewed the idea of men riding into battle on horseback with drawn sabres was the chivalrous and gentlemanly way to fight. The tank was soon to mark the end of such a style of battle and usher a new era of warfare, where technology played an ever increasing role, into existence. The original idea for tanks came with cars, plated with armour and with a turret mounted machine-gun on the roof. From this evolved the modern day tank with moving tracks and heavily armoured exterior. The first tank put into production was the Mark I tank built by the British. 100 of these "Big Willies", as they were fondly named, were ordered. ...read more.

But as more soldiers began operating the tank, many found out that it was loud, crammed inside and too slow, lacking power. The original aim of the tank was to use them as land battleships with single tanks employed in front of a assault wave to destroy machine gun nests. It was a simple concept - a tracked vehicle, lozenge shaped to cross trenches and protected by armor plates. The tank would open the way for infantry attacks, by sqashing barbed wire, overrunning machine gun positions and forcing the enemy out of the trenches. This was first seen, on the fifteenth of September in 1916 on the battle fields of Somme. The first tank attack was carried out by the British. Although almost all of these new contraptions broke down on their way to the front, one made it and changed history as it engaged the enemy for the first time. ...read more.

Nearly 400 tanks crossed into No-man's Land and proceeded to flatten barbed wire fences and ditches to provide access by the following infantry. The attack was so effective in breaking through the Hindenburg Line, constructed by the Germans, that the British were unable to capitalize on the success of gaining 9km into the German defenses, because of a lack of troop support. Even though the battle of Cambrai did not gain permanent ground, it did change the course of the war by moving the war forward and into more open active battles, it also proved that the tank could be used effectively and successfully. Source B, a German encounter describes the suprise value of the new weapon, "the amazed Germans were completely overwhelmed...the defenders of the line fled in panic, throwng their arms and equipment as they ran. Tanks were soon to be used frequently as an offensive weapon in battle and would spell the end of cavalry in battle and begin the move toward technology. ...read more.