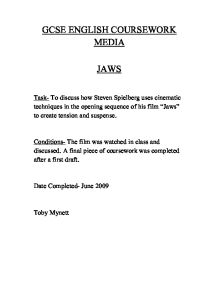 Task- To discuss how Steven Spielberg uses cinematic techniques in the opening sequence of his film Jaws to create tension and suspense.

GCSE ENGLISH COURSEWORK MEDIA JAWS Task- To discuss how Steven Spielberg uses cinematic techniques in the opening sequence of his film "Jaws" to create tension and suspense. Conditions- The film was watched in class and discussed. A final piece of coursework was completed after a first draft. Date Completed- June 2009 Toby Mynett Directed by Steven Spielberg, Jaws was first screened in 1975 and happened to be one of the most successful movies of all time, taking in almost $8,000,000 from the box office within a week. One of the reasons Jaws was so successful was Spielberg's unique approach of capturing elements of fright and history. By effectively blurring the boundary between fact and fiction, the fictional story became all the more believable. Although the film is rated PG, the content in the film is extremely violent and today Jaws would probably be 12A if re-released. Despite Jaws not being one distinct genre, the movie is a combination of thriller, action, and adventure. The film is set in Amity Island, a fictional location situated near the eastern coast of America. There are three main characters in the film - Police Chief Martin Brody, played by Roy Scheider, Quint the knowledgeable fisherman, played by Robert Shaw, and Matt Hooper the marine scientist, played by Richard Dreyfuss. ...read more.

When these small scenes take place many people walk past the camera, which shows how difficult it is for Brody to keep an eye on everyone on the beach. An over shoulder shot is used on Brody's behalf so the audience get an identical view of the beach to Brody. This camera shot shows how many people there are on the beach, and that they are the people that Brody must protect from a dangerous shark. The first real sign of there being any danger is when a dog runs into the water and doesn't return to the beach. His owner, wondering where the dog has gone is wearing a yellow shirt. Speilberg uses the colour yellow to make links between different people who will be victims in some way. Soon after the dog not returning, the boy wearing red swimming trunks runs into the water with a yellow lilo. The camera moves to the shark's point of view, and we see the shark looking for its target. Once it sets its sights on the boy, the Jaws music begins to play again, and gets increasingly faster as the shark gets closer to its victim. ...read more.

Never before did a film manage to capture the terror of a shark without showing it to the audience from the beginning. Seeing the shark's victims getting attacked, but not seeing the shark, pierced the imagination of viewers, as the gruesome image of a shark, with deadly, sharp teeth overflowed their thoughts. Unfortunately, the superb idea of not seeing the shark was ruined near the end of the film. I do not know what persuaded Spielberg to film the shark, for one, the shark was a fake, and obvious to see; and two, the scenes where the shark was not seen proved much more effective than the ones when it was. The ideas were set in place, though the special effects capable in 1975 did not make the shark seem realistic. Despite this, for 1975, the special effects are outstanding. The unique camera angles, the simple and effective music, and the original storyline were what made the film such a success. When watching the film for the first time, I was impressed by Jaws; for it is a film I cannot compare to any other, creating an interesting genre of action and thriller, and managing to capture emotions of individual characters. Spielberg has a made an exceptional film, which cannot be faulted for its time. ?? ?? ?? ?? Toby Mynett ...read more.

The essay writer demonstrates a very sound technical knowledge of film-making, especially camera-work. He employs very detailed analysis of the effects of the movie, showing how the techniques used created the desired impact on the audience (with the possible exception of the fake shark). Paragraph construction is quite well managed, though some paragraphs continuing the same theme could be merged. Sentence control is quite good, with a few slips in verb agreement and tense. Lexis, especially technical language relating to films, is very good.

The essay does drift away from the terms of the prompt, which specified an examination of the opening sequence, into too much narrative detail and as far as the third shark attack. However, this is still very competent writing.