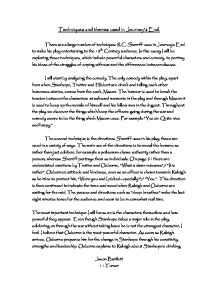 Techniques and themes used in Journey's End. There are a large number of techniques R.C. Sherriff uses in Journey's End to make his play entertaining to the 19th Century audience. In this essay I will be exploring these techniques, which include powerful characters and comedy, to portray his ideas of the struggles of coping with war and the differences between classes. I will start by analysing the comedy. The only comedy within the play, apart from when Stanhope, Trotter and Hibbert are drunk and telling each other humorous stories, comes from the cook, Mason. The humour is used to break the tension between the characters at awkward moments in the play and through Mason it is used to keep up the morale of himself and his fellow men in the dugout. Throughout the play we discover the things which keep the officers going during the war and comedy seems to be the thing which Mason uses. For example "Yes sir. Quite nice and lumpy." The second technique is the directions Sherriff uses in his play; these are used in a variety of ways. The main use of the directions is to reveal the humans as rather than just soldiers, for example a policeman shows authority rather than a person; whereas Sherriff portrays them as individuals. On page 61 there are understated emotions by Trotter and Osborne, "What a damn nuisance"/ "It is rather". Osborne's attitude and kindness, even as an officer is shown towards Raleigh as he tries to protect him, "Were you and I picked- specially?"/ "Yes.". ...read more.

However we do find out about Stanhope's home life when Raleigh joins the Battalion. Raleigh revealed much about him that Stanhope was not content with the other officers knowing. The first time that we hear about his home life is when Raleigh is talking about how,' Dennis used to stay with us', whereas 'Dennis', (Stanhope) had never mentioned this before. Raleigh also reveals,' They're not officially engaged'. Raleigh exposed a secret of Stanhope's as he had never mentioned such an important detail of his life. When Stanhope first sees Raleigh, we see by the stage directions that Stanhope talks, 'in a low voice', and says, 'How did you get here?' This shows that Stanhope is not content on seeing Raleigh as Raleigh knows the truth about Stanhope's home life. This may be because Stanhope does not want the others to know that he cares so much about something, as he wants to keep an image as a tough person or possibly he does not want to be reminded every second of every day of the thing which he loves most but may not see again. As I mentioned there are different ways in which the characters cope with the war. From reading Trotter's parts in the play, I get the impression that he makes jokes simply because he will not allow let himself contemplate anything else as he may not be able to cope with the pressure. We can see this when Stanhope confronts Trotter directly about this, but when he does the question just bounces off Trotter's mind straight away; " But you always *feel* the same." ...read more.

Then they have to go into the trenches and prepare for the raid. The stage directions start by making the whole battlefield and trenches sound that they are covered in an eerie silence, "There is silence in the trenches above the deserted dugout." This builds up tension. Osborne may seem to be the stereotypical upper-class officer, but he shows signs of being unconvinced about the war and its aim. The audience receives this information when Osborne is in conversation with Raleigh, they together agreed on how pointless the war actually was. This would shock the audience, destroying all stereotypical thoughts Sherriff had previously given out. The audience would be very interested now to find out the final thoughts of all the officers. Due to Osborne being a public school master, he has a more intellectual knowledge of words and their meanings than the working-class men and officer Trotter. Even in a child's book, the words from Alice's Adventures In Wonderland touch Osborne emotionally, whereas Trotter cannot "see the point", because he is from a lower-class background, Sherriff has kept the stereotype with the officers literacy, this would keep the audiences stereotypical views are still slightly alive. This is showing his love for his children and a lack of decent effort put into the real war. Once again Sherriff has destroyed the audience's views and thoughts of there being a perfect, well planned, clean war. Slowly but surely Sherriff is bringing the audience to the truth about the war, involving and awakening them at every possible chance. ?? ?? ?? ?? Jason Bartlett 11.Turner ...read more.