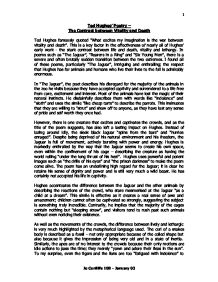 Ted Hughes famously quoted &quot;What excites my imagination is the war between vitality and death&quot;.

Ted Hughes' Poetry - The Contrast between Vitality and Death Ted Hughes famously quoted "What excites my imagination is the war between vitality and death". This is a key factor in the effectiveness of nearly all of Hughes' early work - the stark contrast between life and death, vitality and lethargy. In poems such as "The Jaguar", "Roarers in a Ring" and "Six Young Men", there is a severe and often brutally sudden transition between the two extremes. I found all of these poems, particularly "The Jaguar", intriguing and enthralling; the respect that Hughes has for animals and humans who live their lives to the full is admirably enormous. In "The Jaguar", the poet describes his disregard for the majority of the animals in the zoo he visits because they have accepted captivity and surrendered to a life free from care, excitement and interest. Most of the animals have lost the magic of their natural instincts. He disdainfully describes them with words like "indolence" and "sloth" and uses the simile "like cheap tarts" to describe the parrots. This insinuates that they are willing to "strut" and show off to anyone, as they have lost any sense of pride and self worth they once had. ...read more.

It is Christmas Eve and a group of farmers are attempting to conceal their sorrow with alcohol and false laughter. The situation the poet describes is immediately identifiable, making it all the more hard-hitting. The poem begins on a cold note, describing a starving fox - a symbol of the harsh realities of nature and death. Descriptions like "The moor foamed like a white running sea" create an atmosphere that is bleak, cold and uninviting. In the second verse the farmers huddle around a fire, which instead of sounding cosy, sounds as if they are hiding from the outside world. Later, it is suggested that their unceasing laughter is not genuine but is like a ball being tossed in the air. Instead of actually being happy they are forcing themselves to laugh because there is nothing else they can do, and ultimately because they are afraid. The poet talks as if he is watching them and says, "You would have thought that if they did not laugh, they must weep". He is saying that they are scared to drop the pretence of joviality, as they don't want to face the prospect of sober misery. ...read more.

He reflects on the irony of their lives and talks about the "mangled last agony" one of the men suffered in hospital, while for some "nobody knows what they came to". In the last verse, the poet claims that "six celluloid smiles" are no less alive than any man, but at the same no less dead than a prehistoric creature. Hughes feels very strongly about the photograph; it is a paradox, a contradiction that that they should be smiling, when with hindsight he sees too many reasons why they should not. Hughes remembers them twice - in death shot by rifle or trying to save a friend, and preserved in his cherished photograph which has not wrinkled their faces or hands, and they live in his memory, young forever. All of these poems touch on "the contrast between vitality and death", either comparing the two directly, or focusing mainly on one of them. It is obvious that Hughes found victory in the untamed will of the Jaguar, and admiration for the remarkable lust each of the "Six young men" had for life - whereas he scorned at the farmers who led pitiful, timid lives which ended as uneventfully as they had existed. 1 Jo Cunliffe 10B - January 03 ...read more.